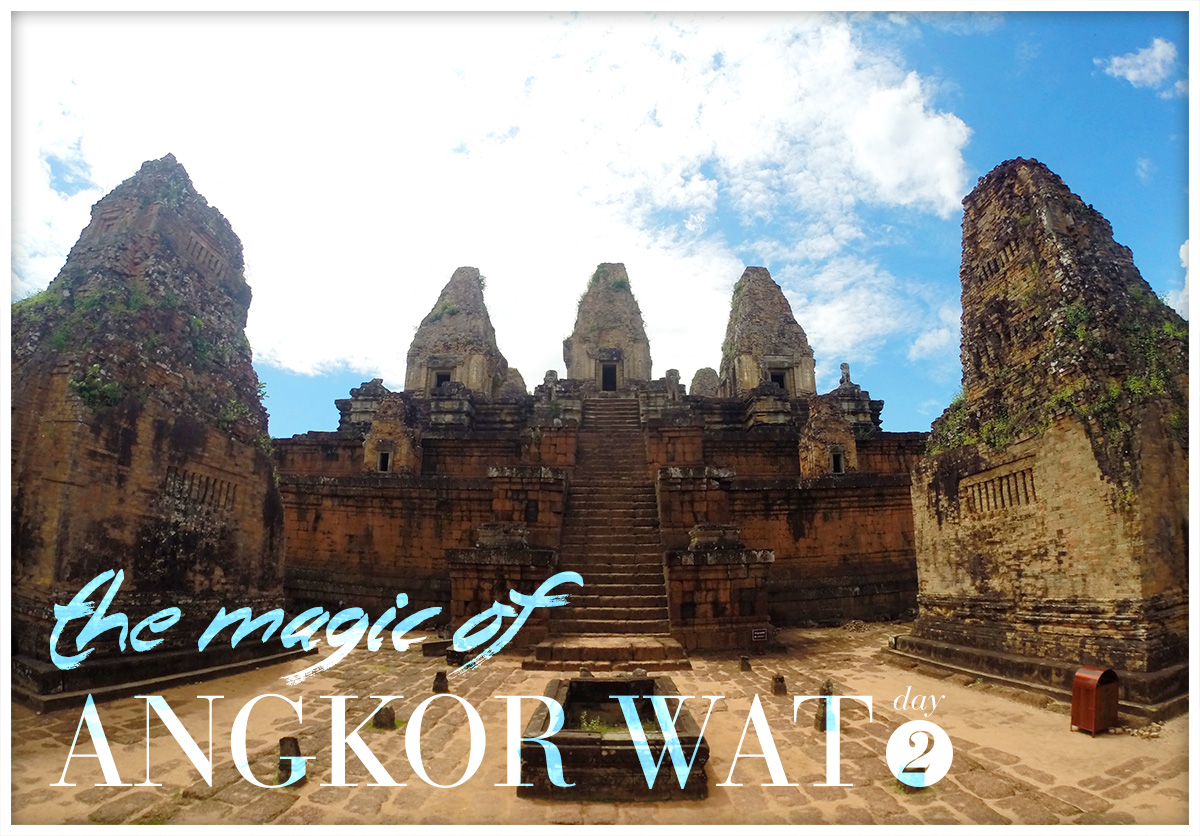 Continuing the story about the second day of Angkor Wat tour guide..

After the good first day turns out the second day in Siam Reap was more fascinating! Maybe because we were visiting temples that weren’t many tourists would go. The places were quite far and the weather was a bit strange. It was raining half of the way and then suddenly it stopped. Half an hour later it got heavy rain again. Jumbo was our hero. He kept riding the motorcycle with the raincoat even thought there were big winds and hard rain.

Luckily, when we reached on the first temple, the sun was out and the sky turned so blue! Of course, we were happy (oh Jumbo too!) The first temple were enormous and there were only 3 tourists besides us. So we basically ran here and there so freely. Can you imagine this kind of scenes? 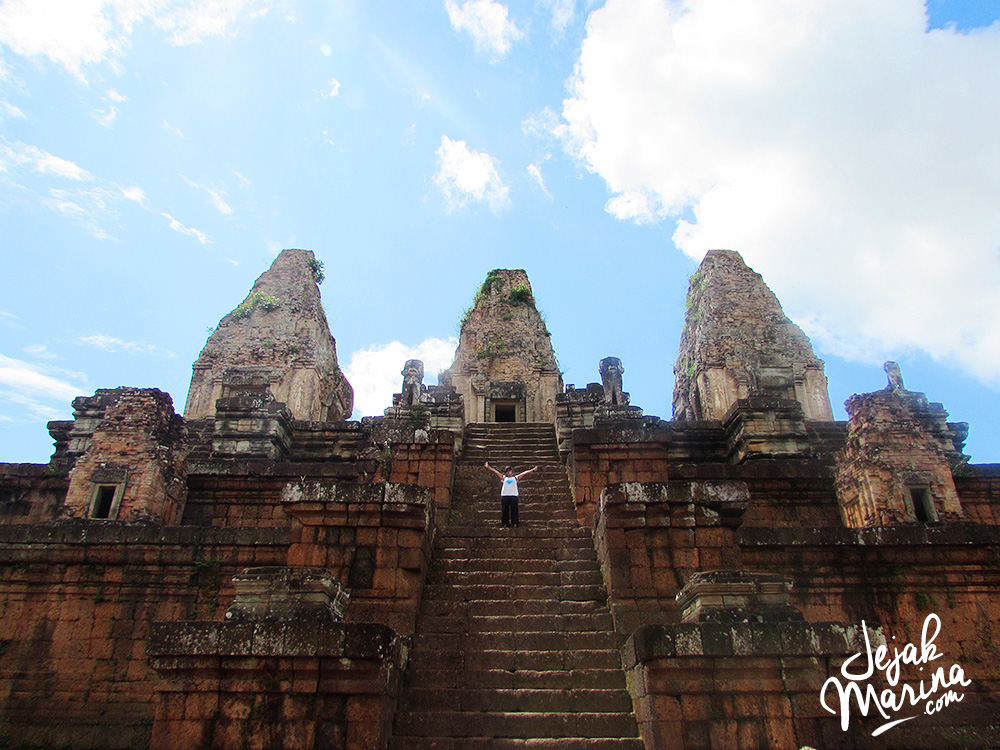 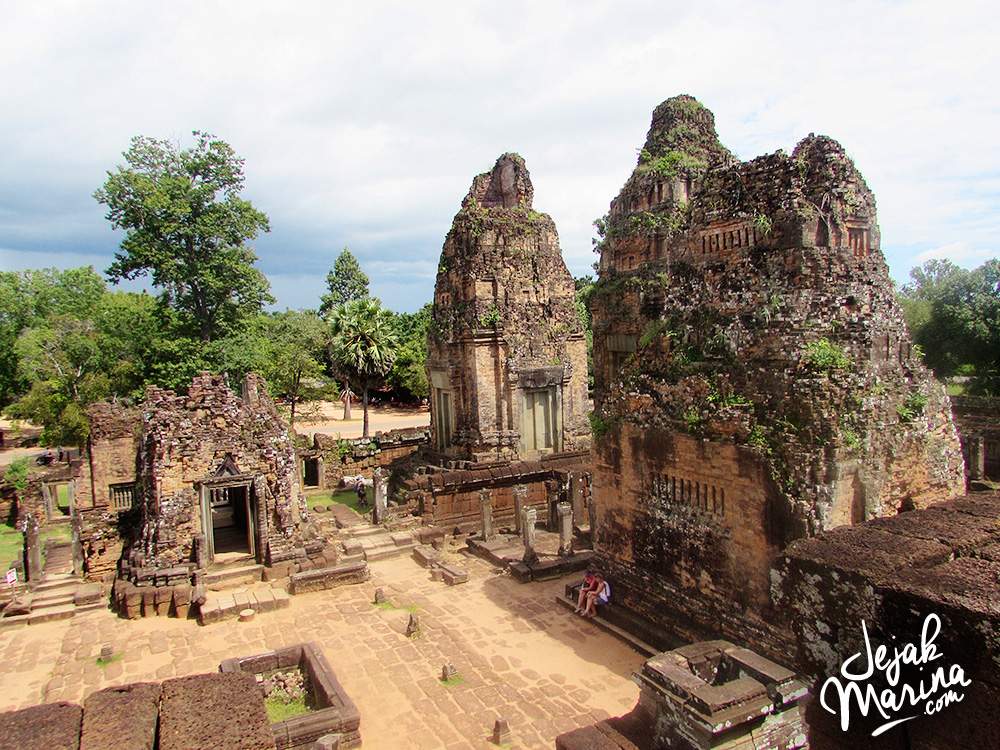 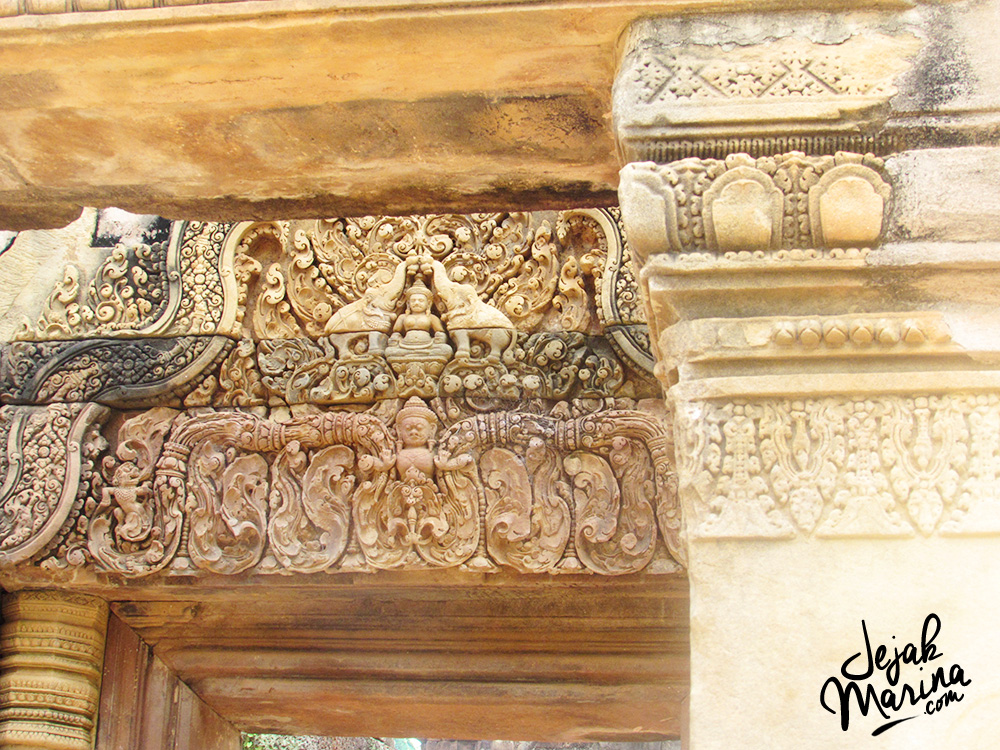 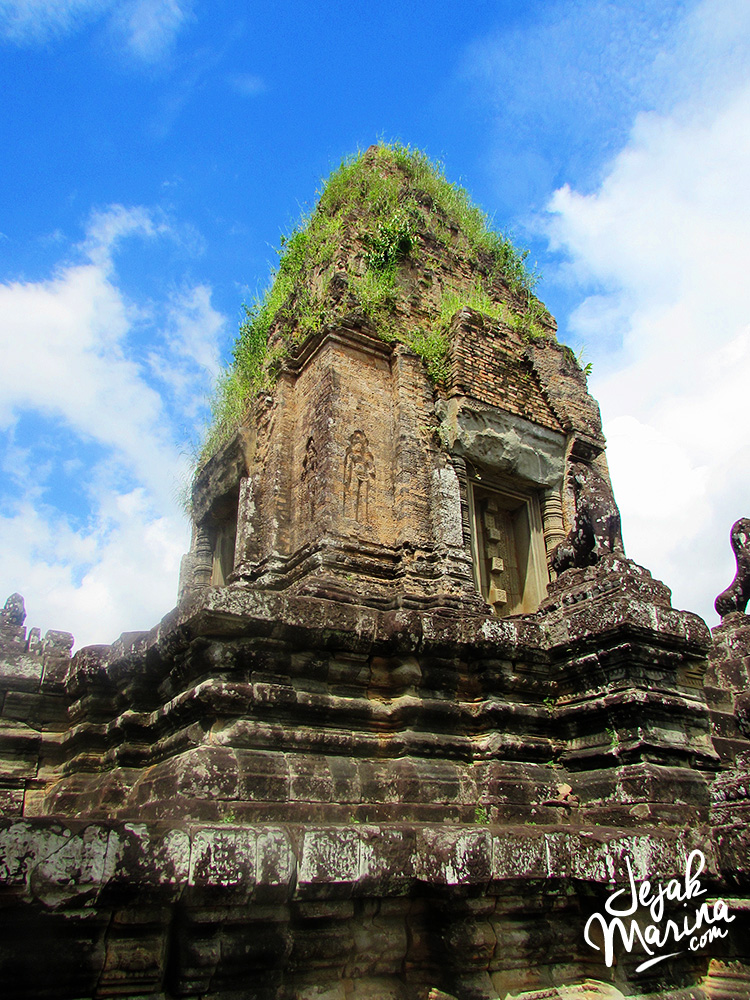 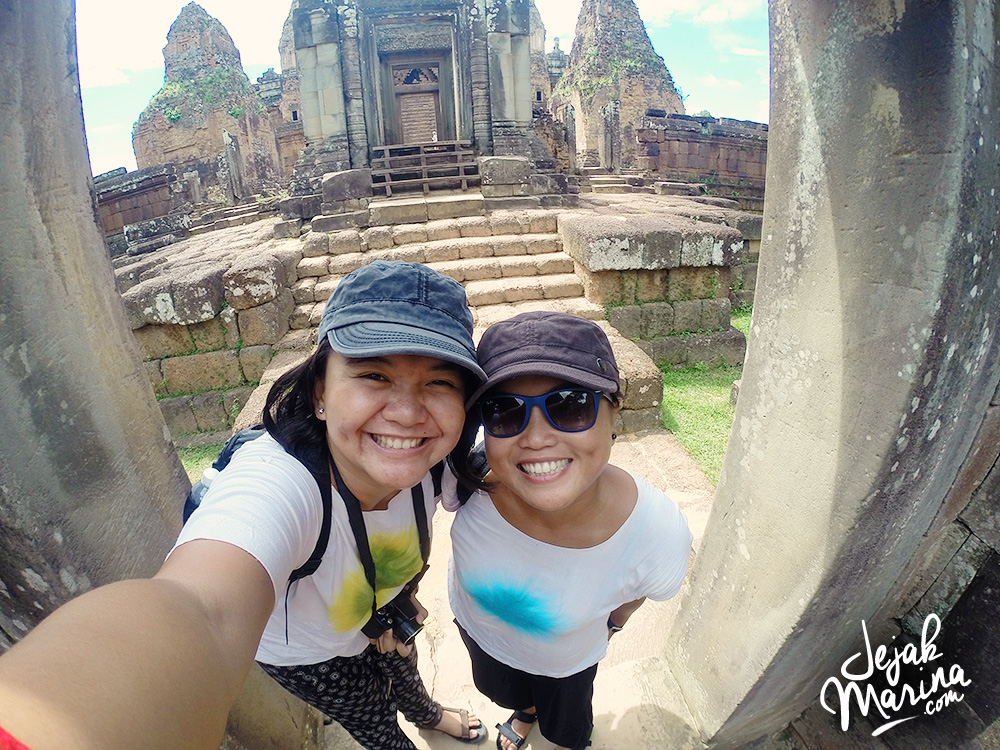 The next temples we visited were quite similar. But what I love about being away from the touristy place is that you can keep the whole place for yourself. A bit eery, but loving every minute of it. We kept on hunting the details of the temples that were still whole. It made us feel that we can absurd the magic within. 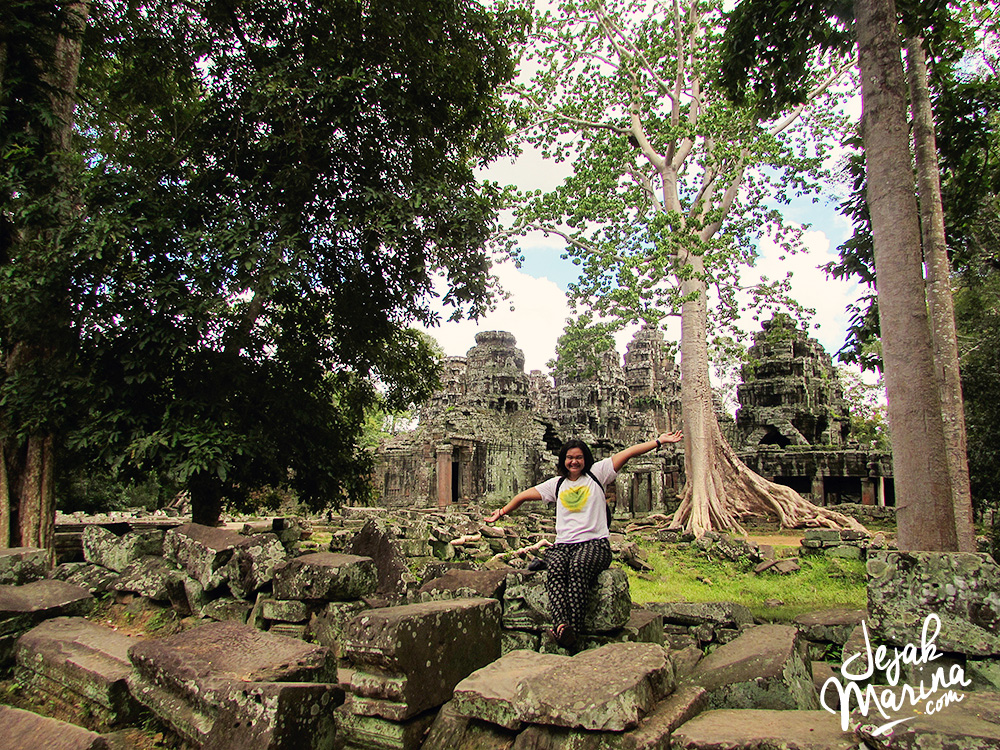 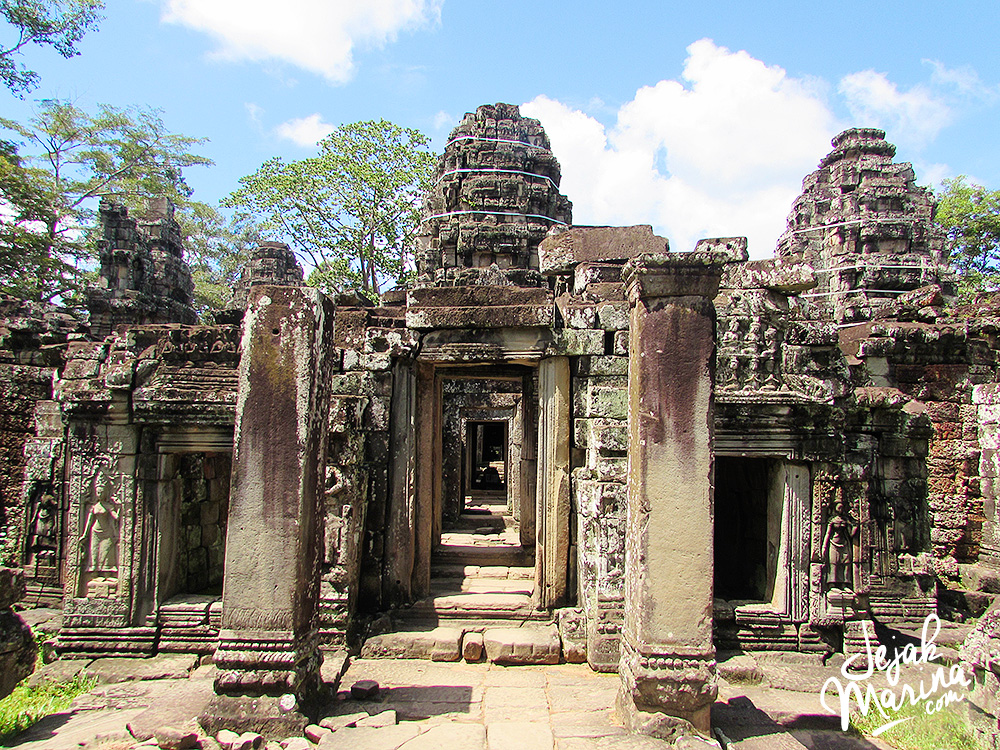 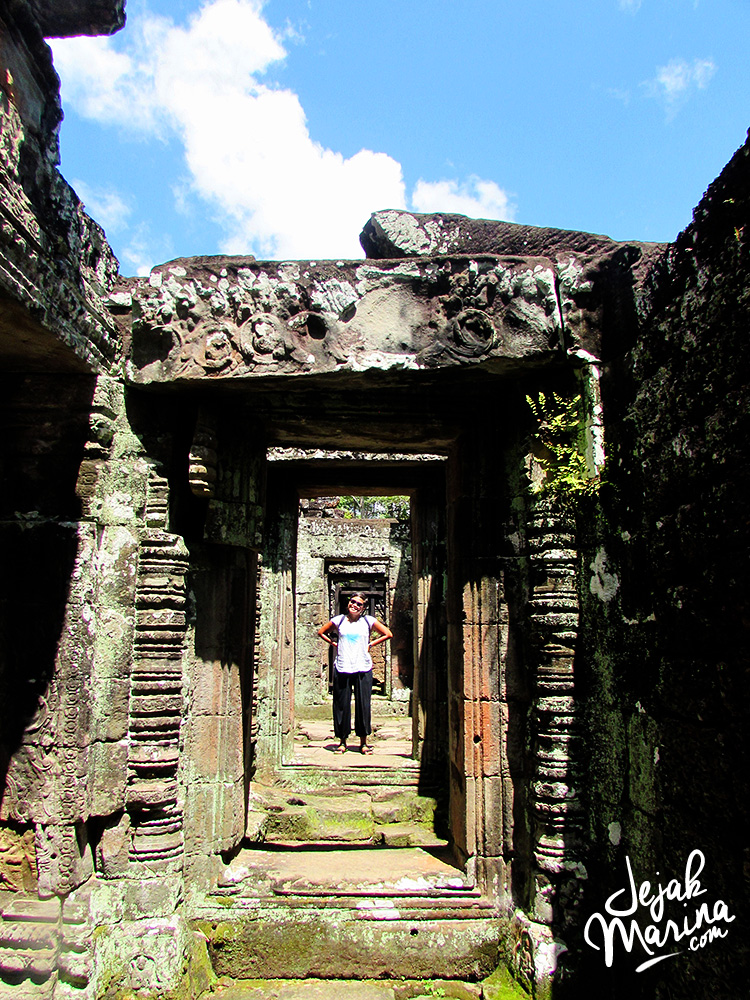 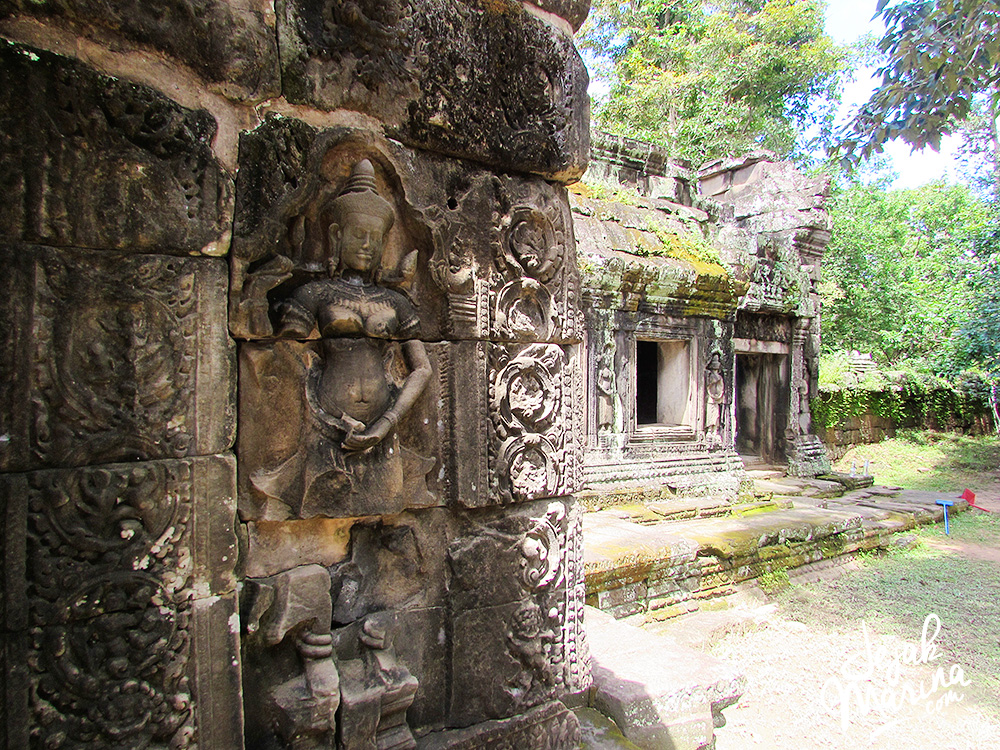 There were so many things that we couldn’t just say with words when you were surrounded by this enormous temples. I felt so little. Yet these-these ruins were the proof of the human existence centuries ago. They were brave and creative enough to build such magical places that could last for hundreds of years.

Oh, and how could they engrave those beautiful stories into sculptures on their building. Gosh! Could you please look at those details? 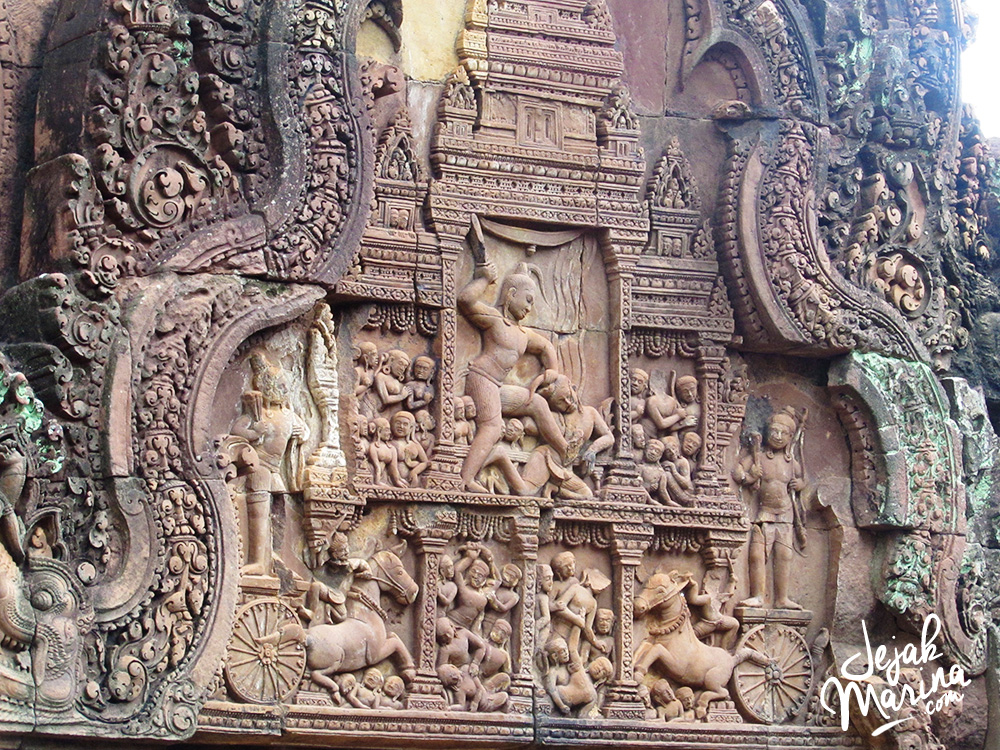 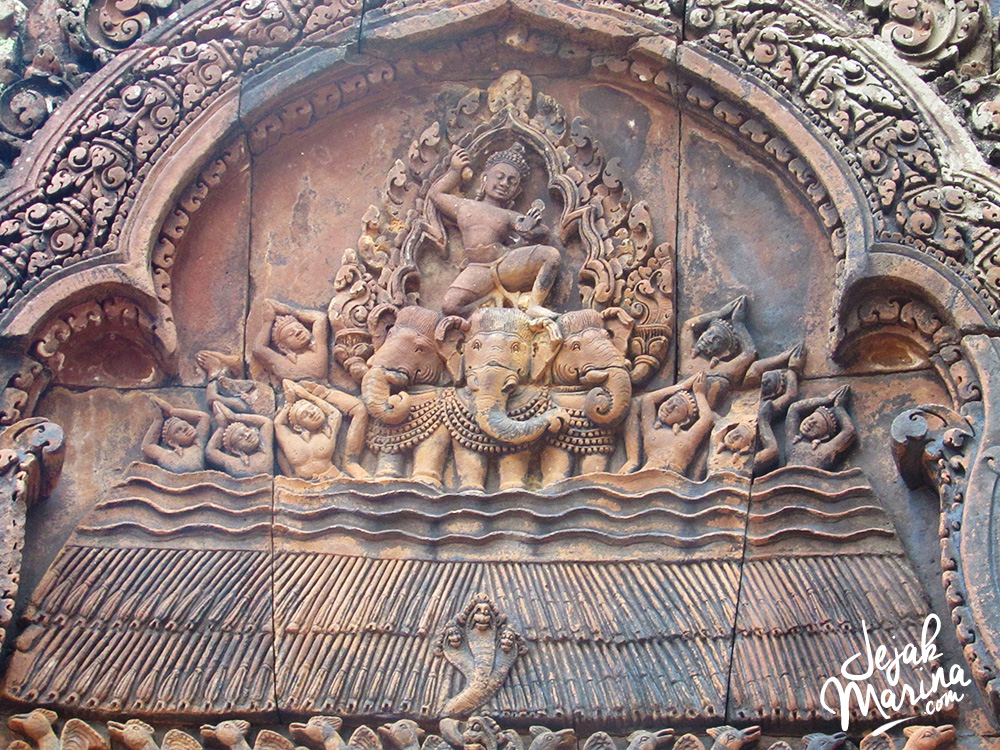 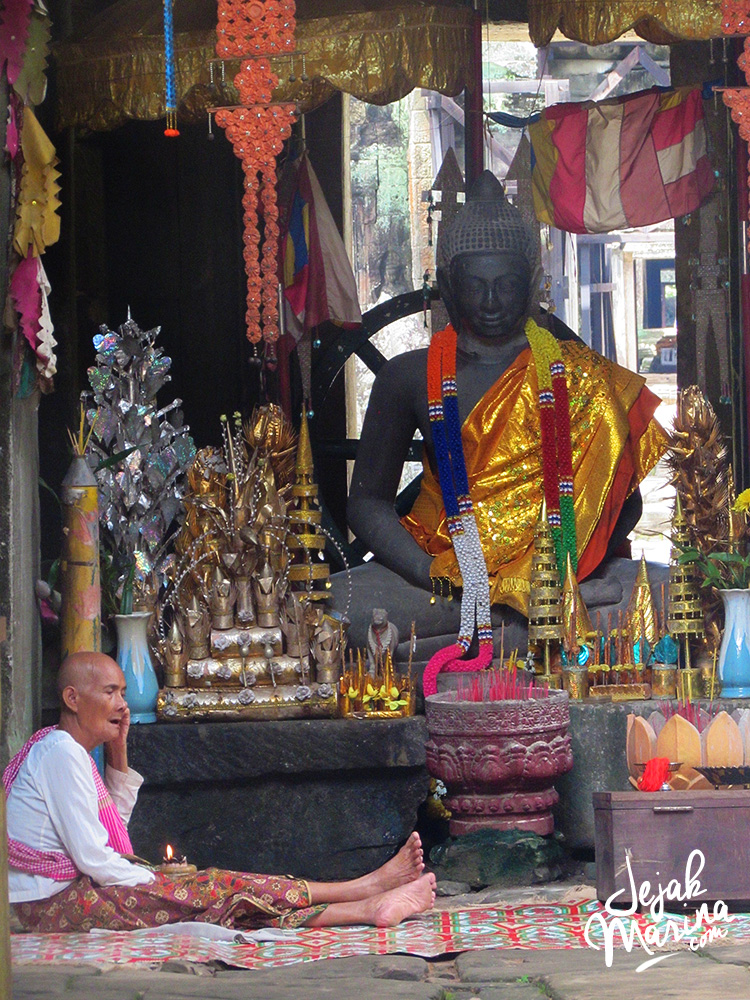 So we finally got into the farthest one. The last temple that we went were quite small but it has huge ponds on every side. This place apparently famous for the tourists, as when we reached there, the place were so full of people! I must admit that the temple is romantically beautiful. It has different ambience than any other temples we’ve been to in Angkor Wat. 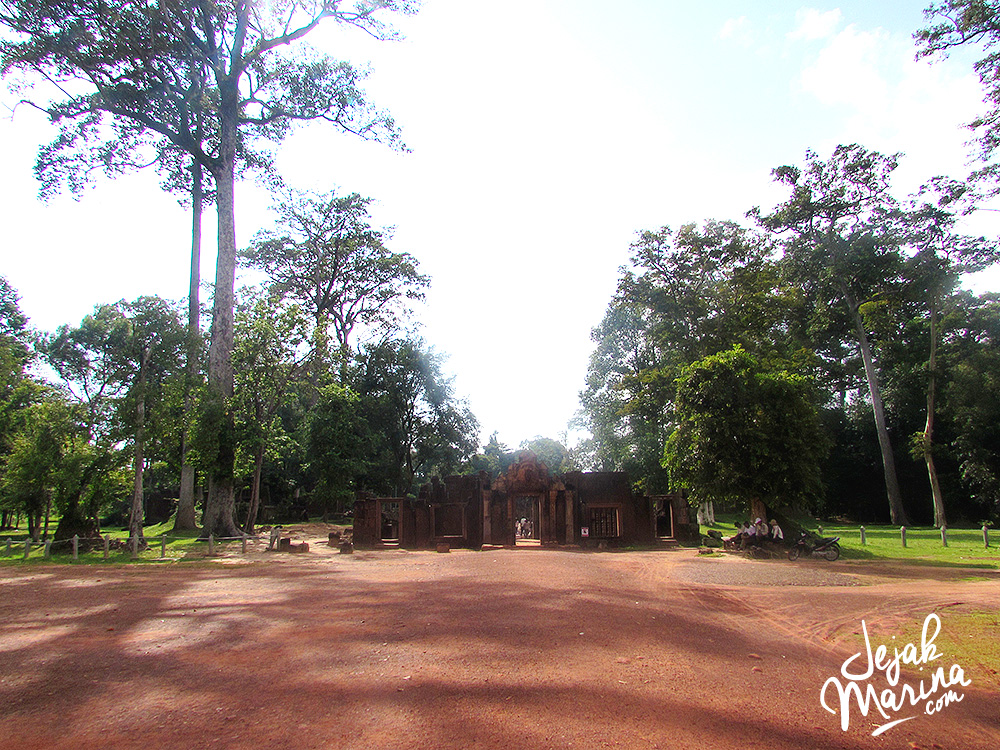 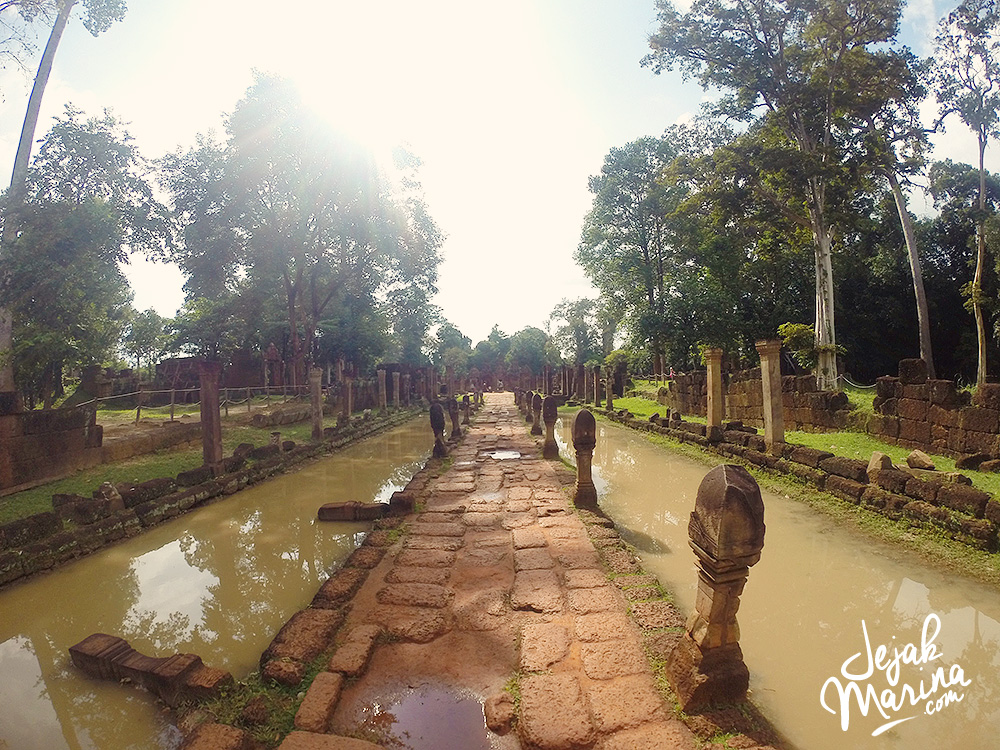 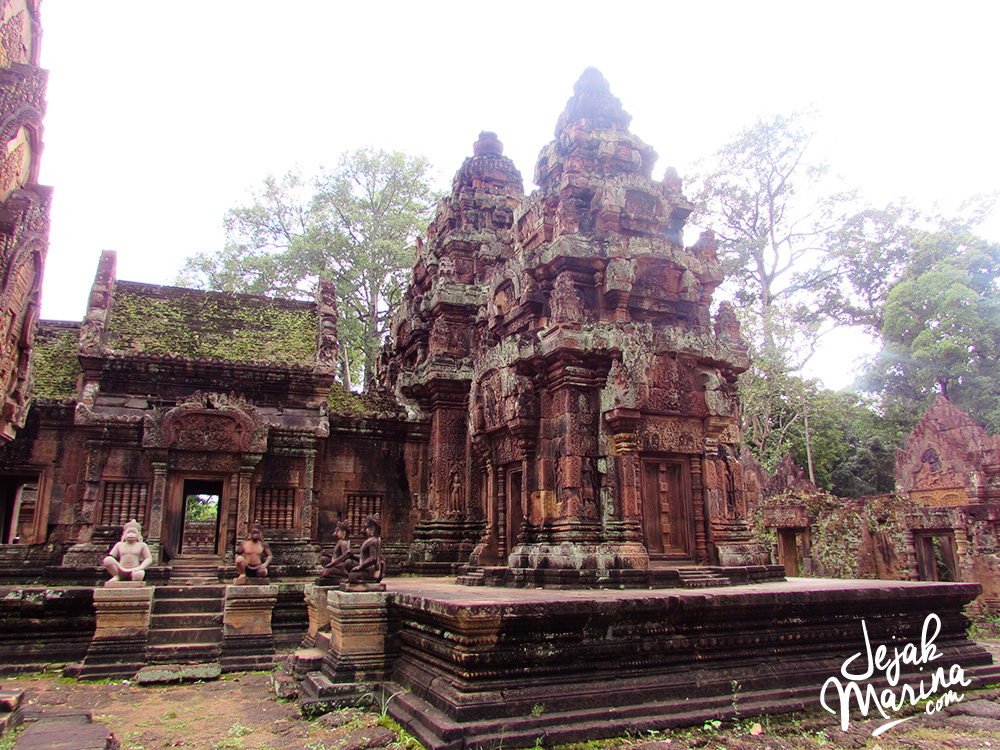 As we were going back home, Jumbo took us to one last temple before Angkor Wat close (Yeah we really don’t want to miss a thing eh?) But.. we were unlucky because the rain poured hard again! Oh don’t worry, this kind of thing never really stopped us. Arma already prepared with her rain coat. Is her expression funny right? 😀 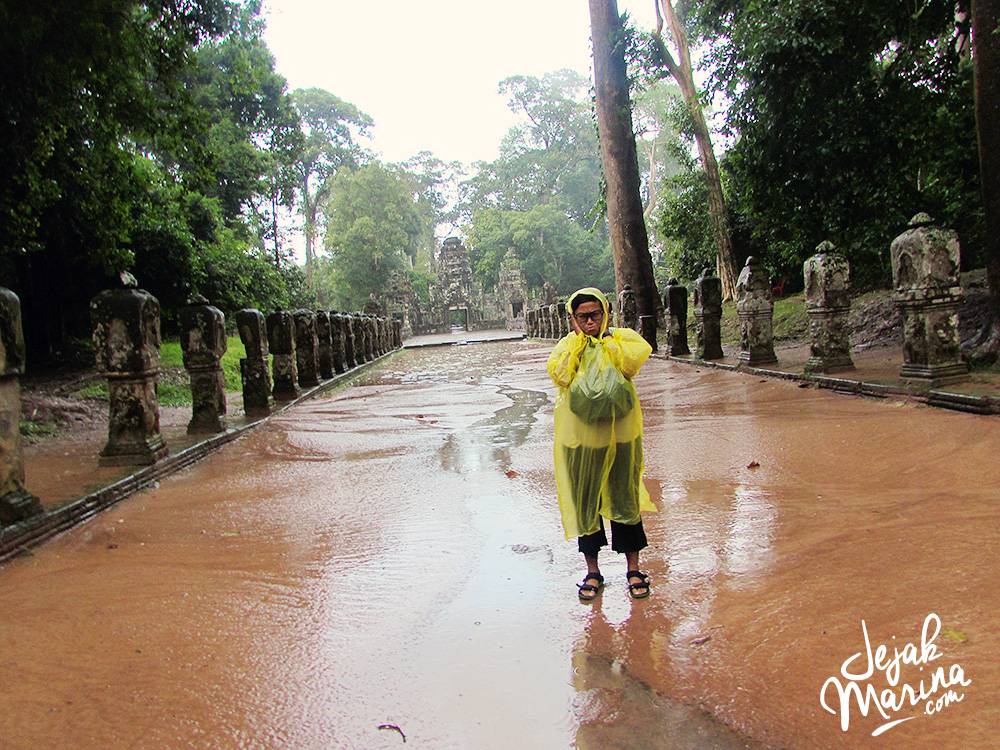 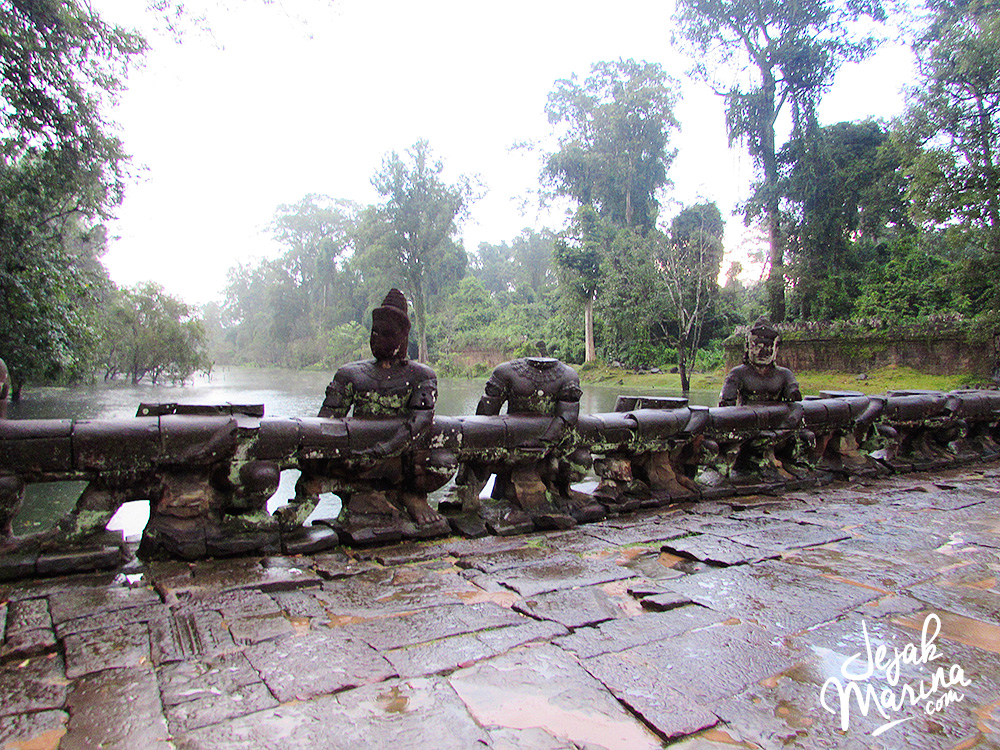 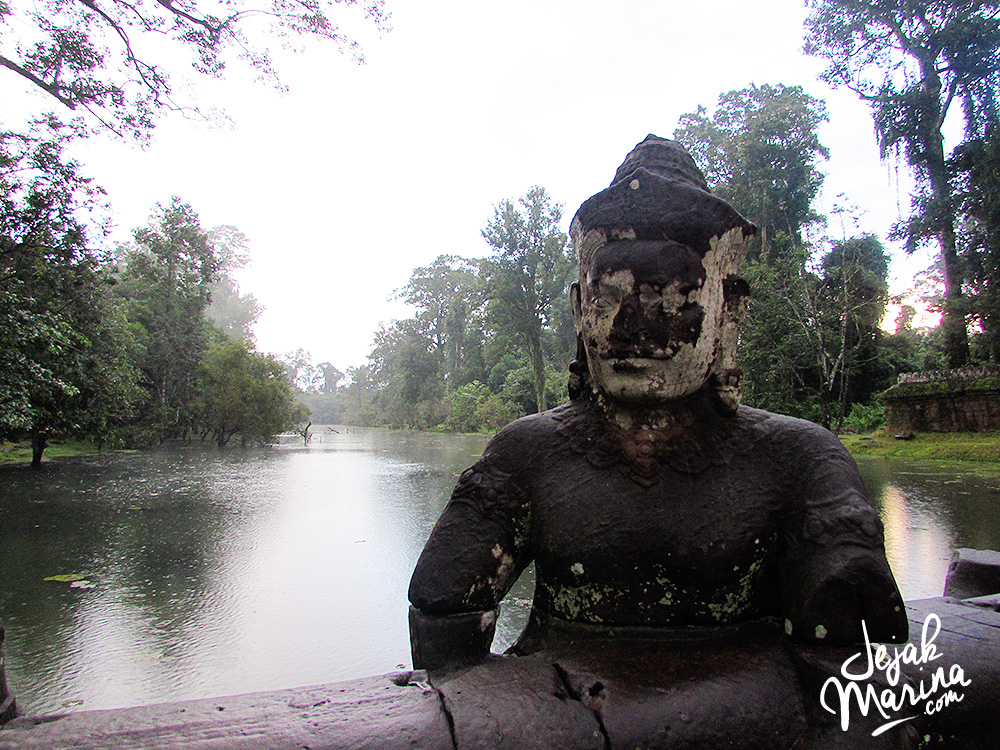 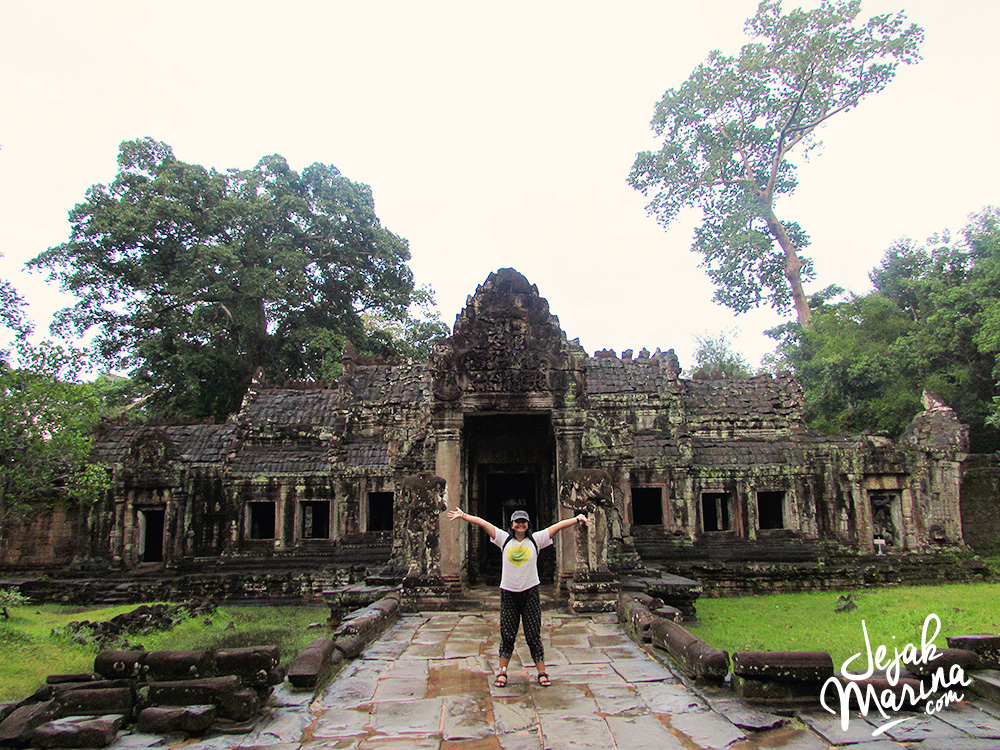 By the end of the day, we were absolutely fully satisfied by 2 days of temples hopping. I would definitely recommend taking the 2 days tour and 3 days ticket pass. It cost more, but the experiences were much more worthy. You can read a list of a quick guide that I have written to make it easier for you to check.

Each of them has their own uniqueness that no other place could offer. Yes, even from Borobudur and Prambanan of Indonesia, Angkor Wat has its own charms that could captive your heart. It sure captured ours.

How to contact our Tuk tuk driver, our hero, Jumbo?

Call him when you first landed in Siam Reap or the day before: 017456671 (Cambodian Number)

I loved Bantay Srei but I probably would have enjoyed it more if it wasn’t too hot when I went. Loved it though. Great pictures!

It was!! Come visit someday! 🙂

I love Angkor Wat! Such a magnificent place indeed..

Hi! the place is so beautiful and i hope Jumbo’s phone number still exists.
I’ll be in Cambodia in the end of December, your blog is really helpful for me. 😀

Hey Juli! Wow! Glad it can help. I am happy for you to visit Cambodia! Please say hello and say I miss him to Jumbo too! 🙂

Enjoyed reading your post as we went to Angkor last month. Pre Rup was our favourite as we watched the sunrise there, and yes I agree it’s great when you get sone of the temples to yourself – like raiders of the lost ark or tomb raider!!

Thanks Garth!! Oh yes of course! Glad you enjoy the time there! 😊

[…] Once we arrive, we looked for the guesthouse and contacted tuk-tuk driver that Arma knows of to start the next day exploring Angkor Wat. You should do the same, try to find a reliable tuk-tuk driver or contact our driver that we had before. Read more about it here. The next day we had our sunrise as the start of Angkor Wat tour and then we had amazing big loop tour on the next day. […]