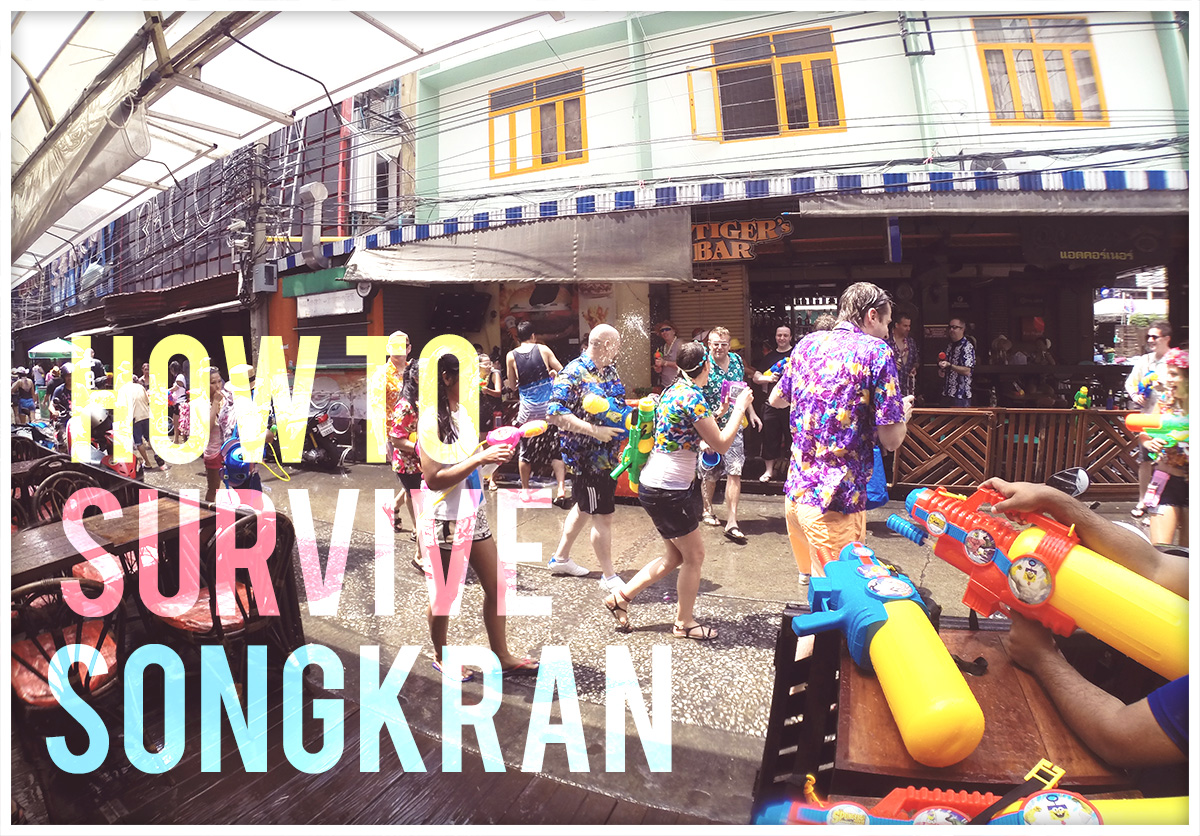 Another bucket list of mine just got scratched on this year! Wohooo! After the great time of temples hopping in Thailand and wonderful journey with my besties in Ayuthaya, I finally experienced the water splashing fight of Thailand’s New Year Party. Oh boy, it was a hell of a war. Like seriously super crazy! Therefore I am writing some Songkran guide for you to survive the party in Bangkok!

And so I have learned that before the big event happens, it’s better to prepare the ammunition. Don’t want to end up like me and my friends who decided to buy the water gun later. Big mistake. We ended up wet and couldn’t even fight back. We were the perfect target as soon as people seen us in dry clothes. 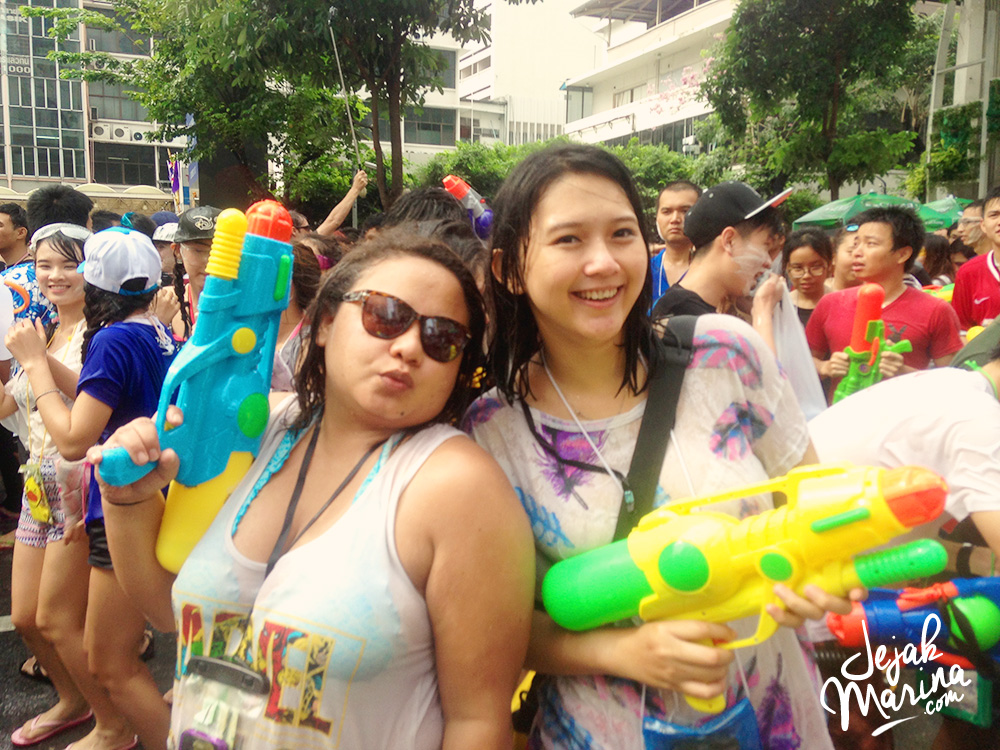 Of course, you need this! Bigger is better! The splashing, the water supply, and the power are different if you compared the big ones and little ones. You know what they say: prices really define the quality. We were so wrong about buying the gun on the first day of Songkran because people already throw us water, and it was so freaking annoying because we couldn’t fight back. So buy the gun the day before the party and leave your house with the weapon filled with water. 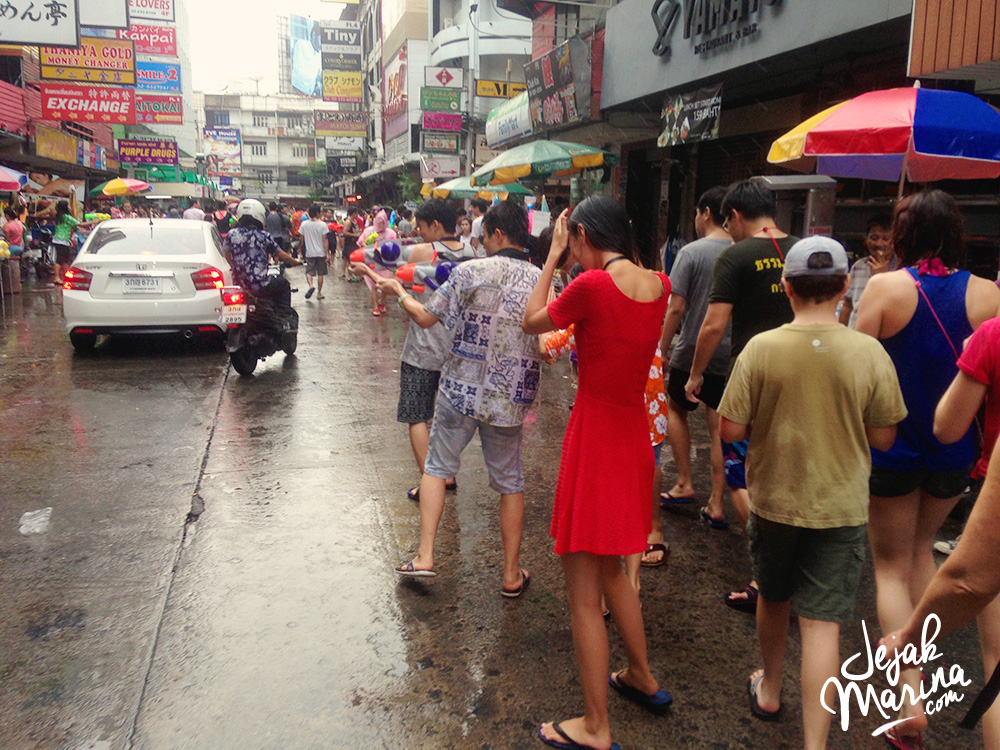 You’ll get wet. You know that right? 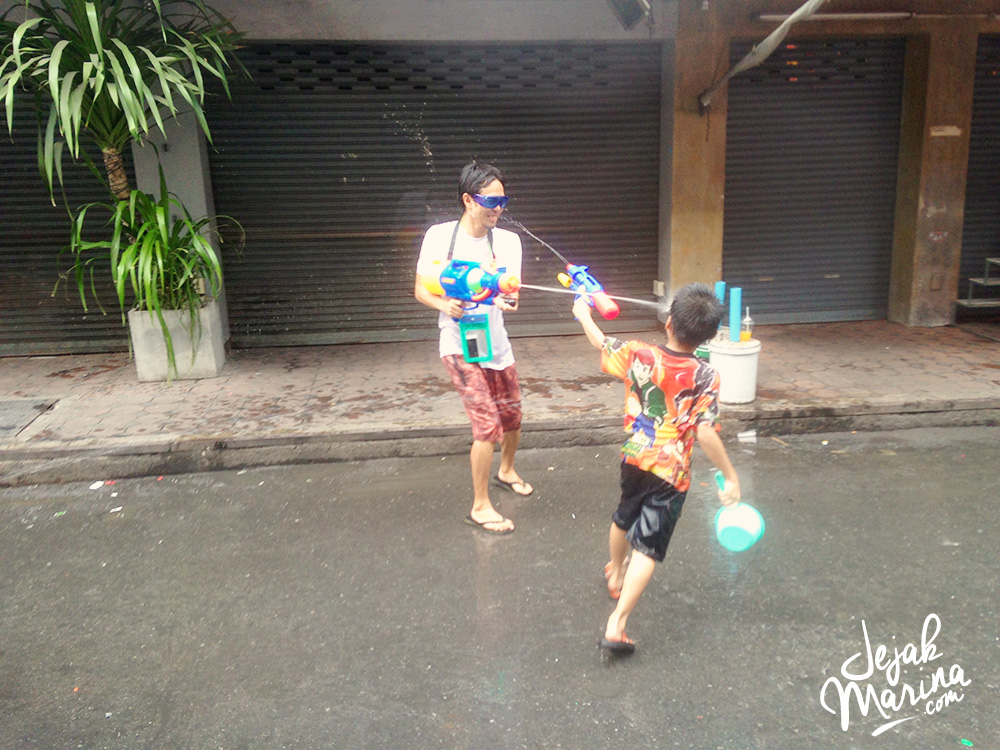 One of my friends bought along one big bottle of water in his bag. He said that it’s his supply of water to shoot people. I think that’s pretty clever! Because you water gun will run out of water pretty soon and voila! You have the backup ready!

We asked many people about where to do this crazy Songkran party. The taxi driver, our host and our friends said the same thing. There are 3 top places you could go in Bangkok: Silom Road, Khaosan Road and RCA area. They will get the party on until midnight!

We went to Silom Road the first day, where many locals came and there were so many people and stage with people dancing and singing (they get water splashed too from the crowd) It was a fun day! 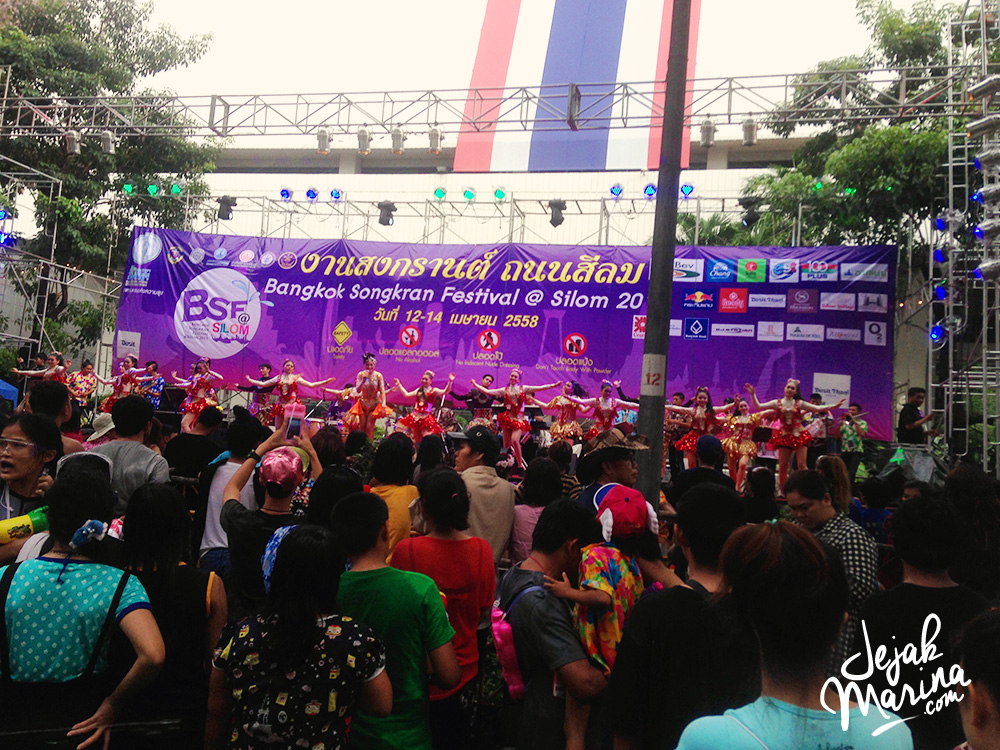 The second day we went to Khaosan Road just to checked out the shops, see if there were open. Boy, we were wrong. We ended up getting wet, threw at again, and our faces covered with powder. As much as we like Khaosan Road, it was too packed with people and we couldn’t enjoy the moment. 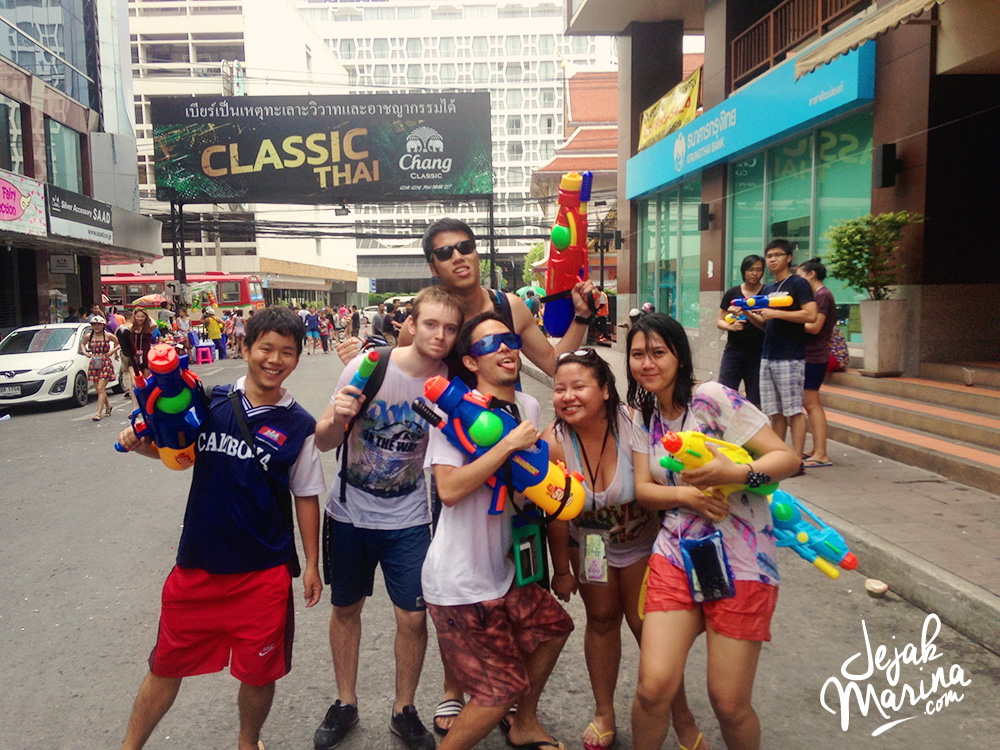 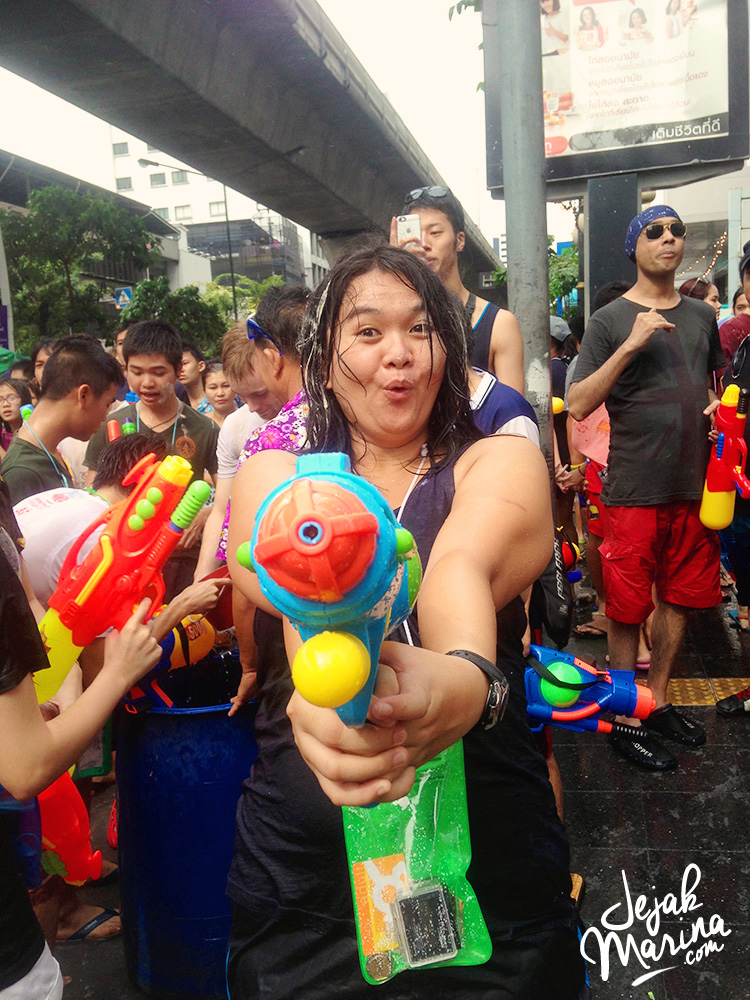 Who wouldn’t want to get their pictures taken during these once in a year events? So thank God that I bought a waterproof iPhone casing in Indonesia because I couldn’t find any in Bangkok when we arrived. It’s super important if you really need to document the event and immediately share it with your friends and family. At least you need a waterproof camera to capture the moment then you are all set.

6. Get Ready for the Ice Water (seriously) 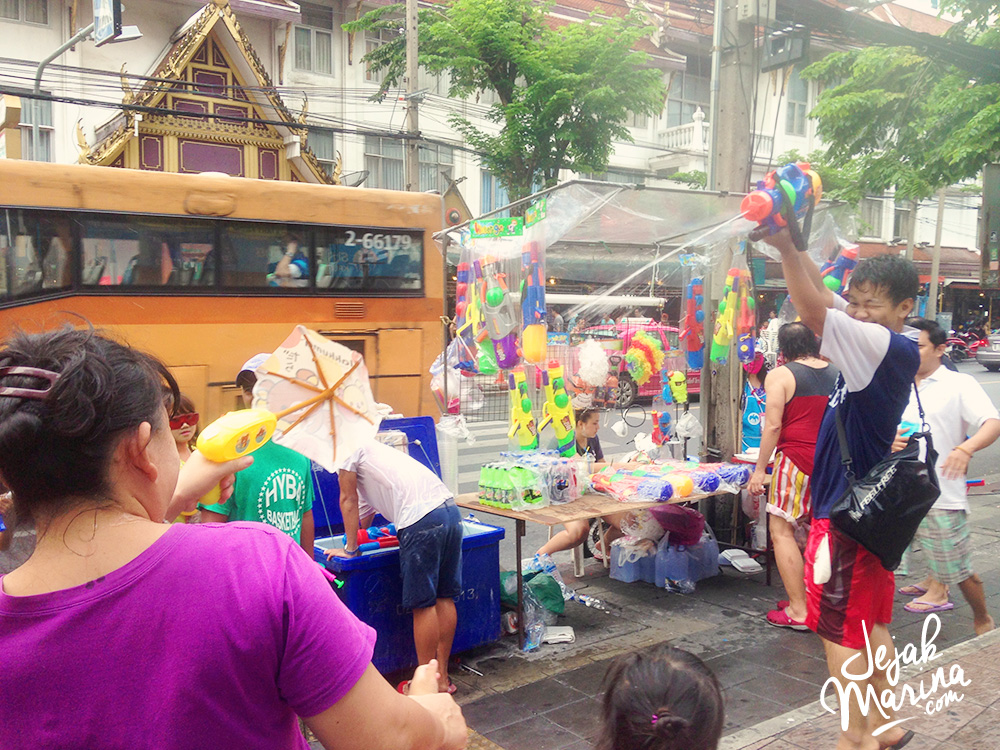 We were quite shocked when people started to throw us ice water. It’s like the super freezing cold. Apparently, they loved it too much that they even sell the ice water for 5-10 Baht per gun. So be prepared for it! (Freaking freezing!!) 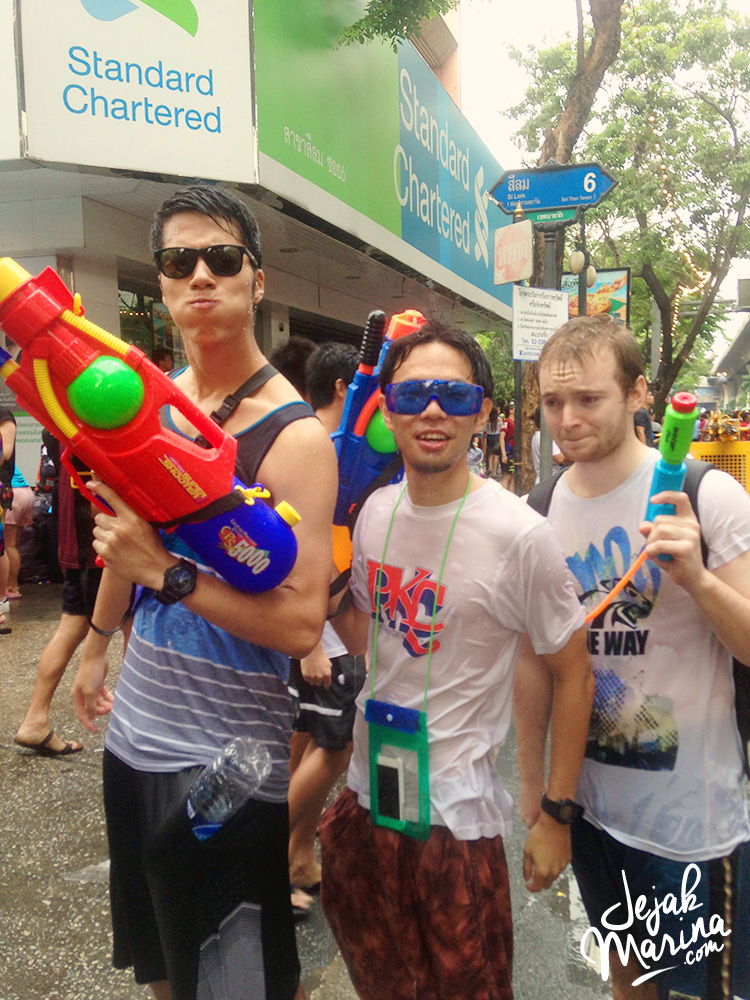 Face it. You will never be dry. People will always throw and shoot you water. So get all of your things packed in your waterproof bag. We bought these pocket waterproof necklace that all people used. It’s safe to put our money, subway ticket and our phone.

We were swamped because the subway was so damn full. So we took the tuk-tuk instead from the main road. We were so lucky that we found any because the street was jammed also. 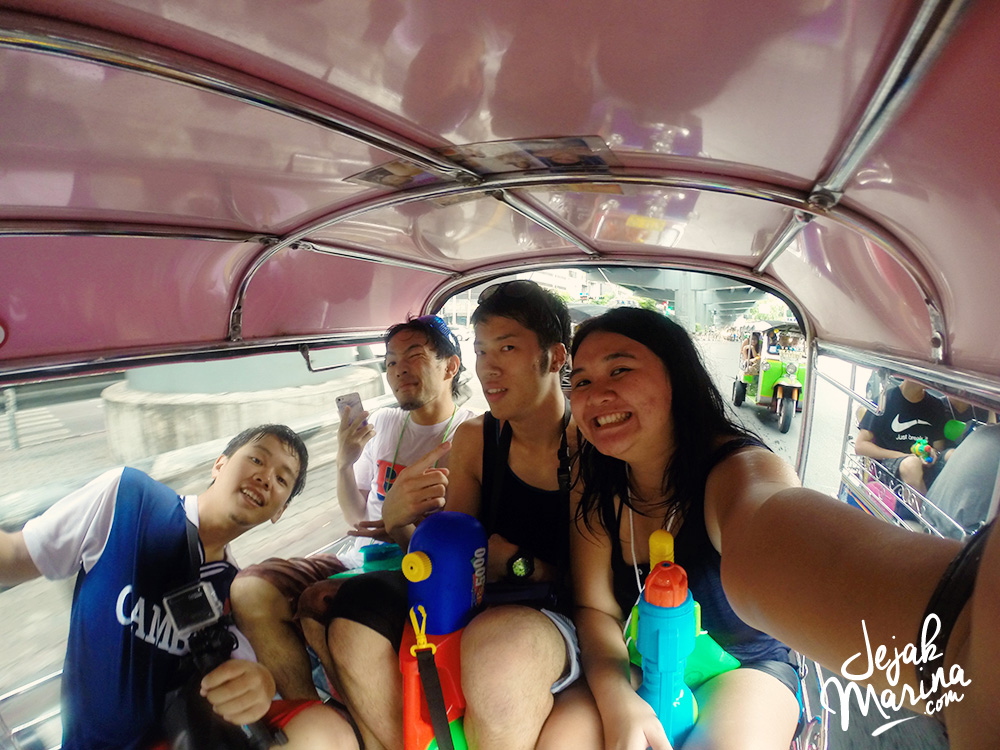 So you might think you are safe? You are not. People still throw and shoot water to you as soon as they seen tuk-tuk filled with wet people. At first, it was fun, but then again the wind from the ride made us chilled. I kept begging to people not to throw us water, but hey! They still did! So we ended up feeling so cold and wetter once we arrived.

It was exciting even though we were annoyed! We ended up laughing so much despite the cold, so I really recommending taking tuk-tuk when you get into this festival. 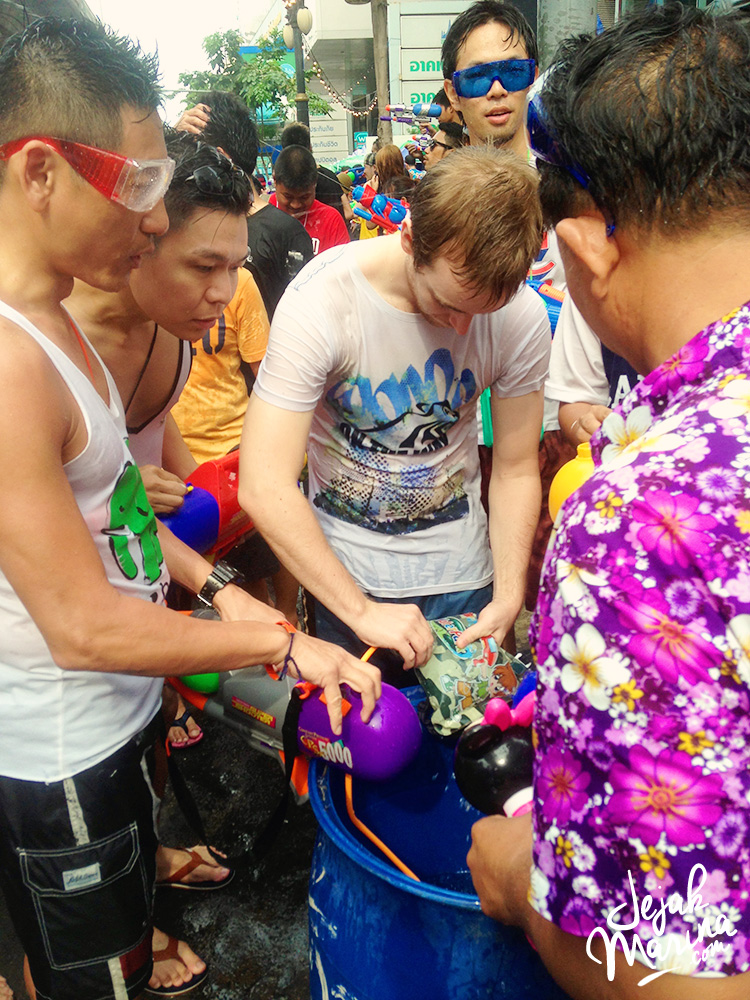 Get ready to be cold for 3 days of Songkran, so you need to put your health as first priority before the events. I was getting the flu on that week, and I tried hard to get better before my flight. It’s the same also after the events, you need to get back on your feet and be prepared for the next day activities.

As much as fun the 3 days of Songkran is, I have researched and read that people even get killed during these water fight. Accidents on the street are most likely because people are shooting water without awareness. So please put your safety first rather than the pleasure.

10. Have Fun, Get Revenge and Shoot Strangers Unnoticed. 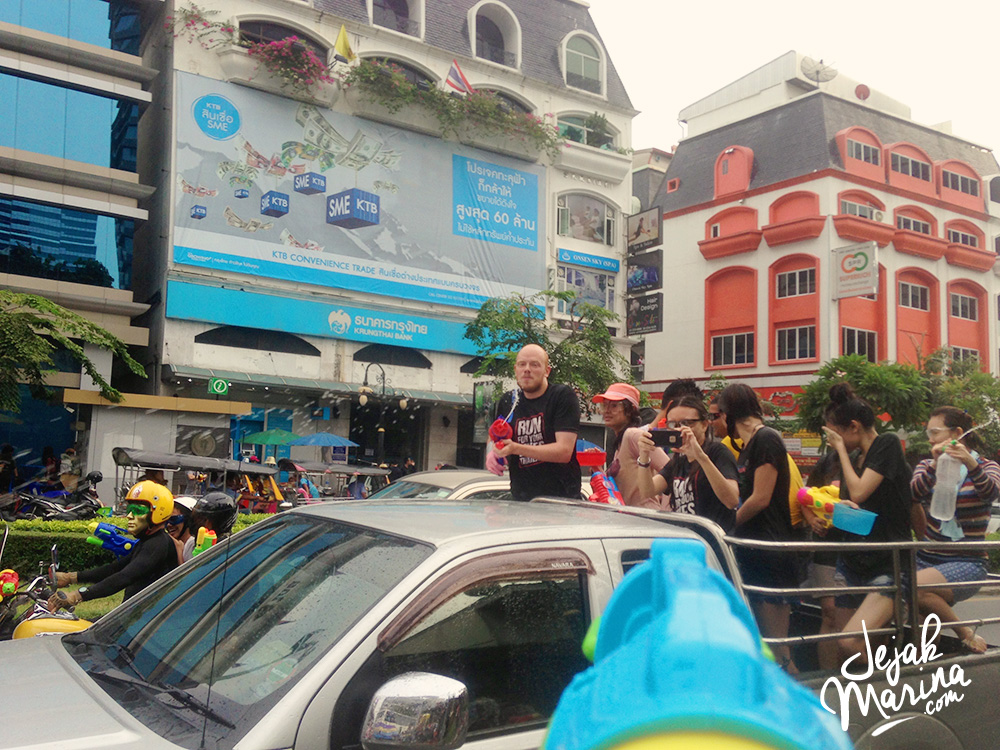 It is fun being naughty and a little mean to people who don’t even know you. This is the perfect chance! So while we were walking on the road, we kept shooting people unnoticed, and of course, they get you back again. 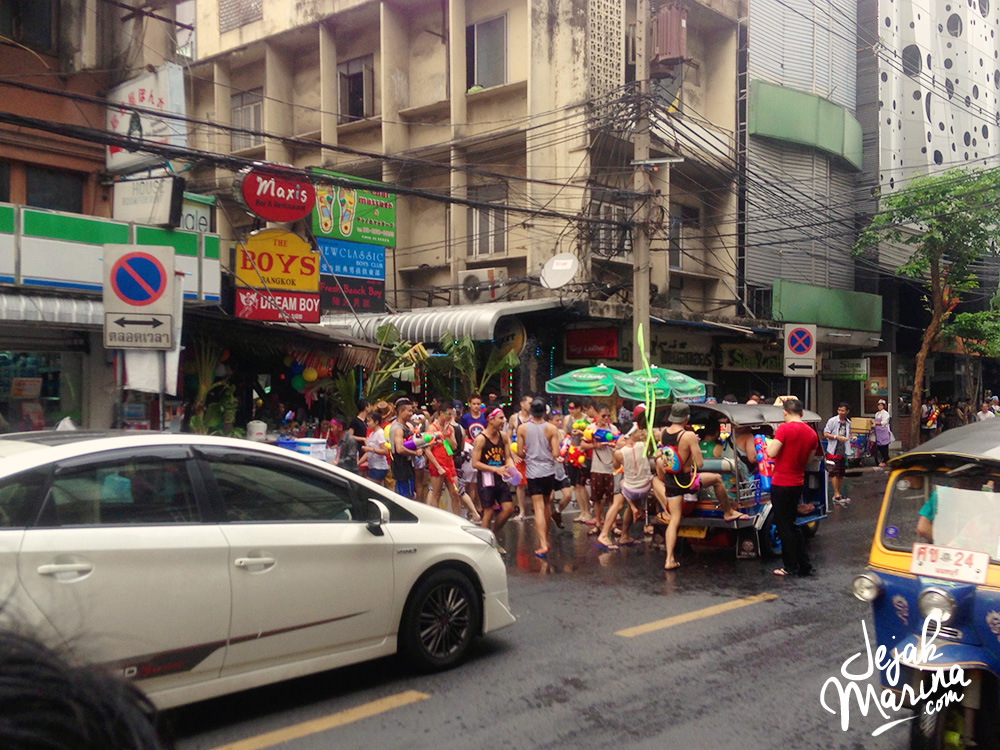 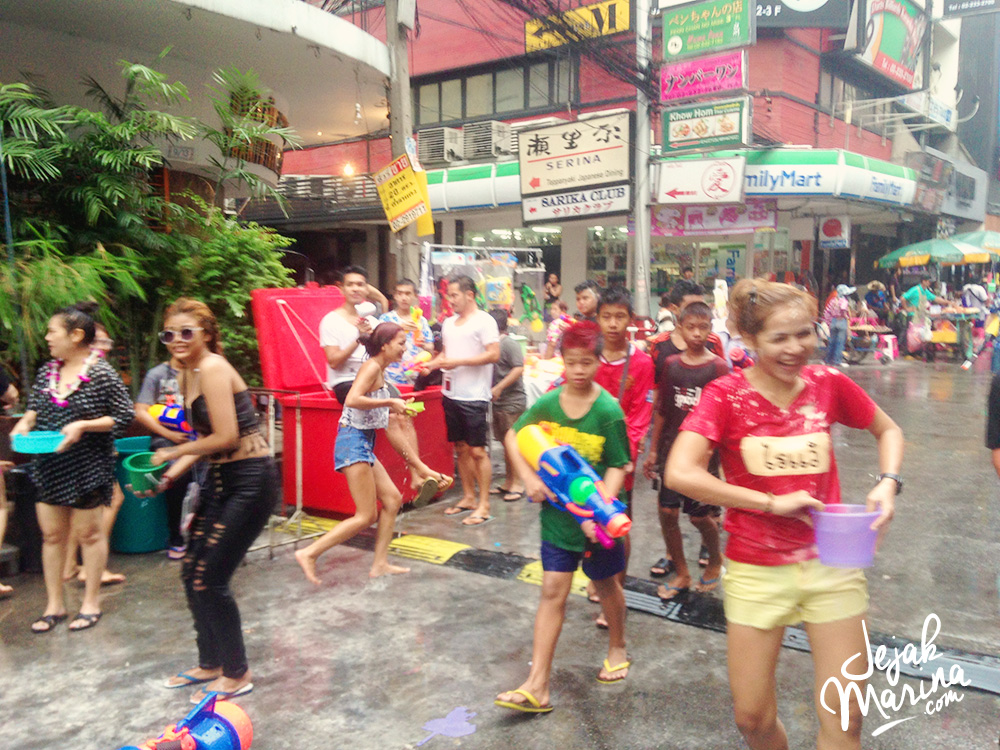 Oh, don’t think that other people don’t have the same mind like you! You’ll get it too! Playing water like kids at this mature age, never been this fun! I really recommended this kind of once a year festival event!

You can always go to one place and visit the tourist attraction, but it is so rare to join this kind of local festival that only holds ONCE a year!

So come next year won’t you?

[…] ago. I also maintain good relationship until I came to visit them again, such as when I went to Bangkok for the Songkran Party, we had good fun times […]

Hi Marina,
Thanks for this post. Living in the Philippines there are always short flights to various regions of SEA Asia. Experiencing Songkran has been a dream. Growing up with nerf guns and supersoakers, how could it not be? These practical advice and tips you give are very much welcomed. Though most we would have already considered but an extra towel or change of clothes in a water bag would save us from the cold you talk about. Hoping to join one day soon. Thanks again!
Mark V

Hi Mark,
Ahh! Good tips! I did not think about that. Thanks for adding that up. And yess! You should come and experience Songkran once in your life. It would be so much fun!
Thanks again for reading 😊