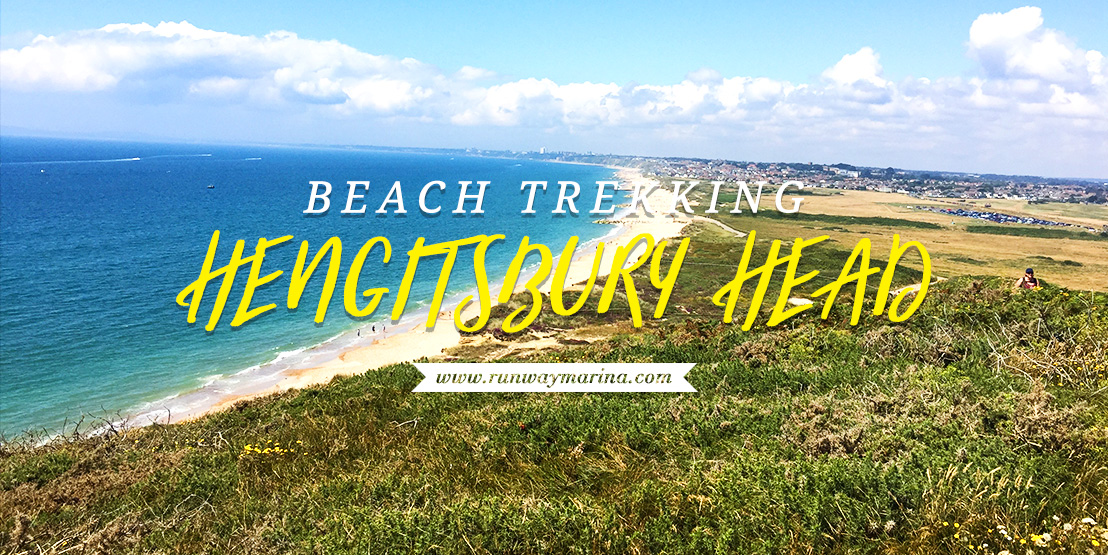 Spring is already here and it’s getting warmer! This brings back to the best day I had on the beach (one and only) in the UK that I thought was spectacular! It was only one day trip from London and I would never be thought I would meet the landscape such a beauty. I went beach trekking in a place called Hengitsbury Head, located in the east part of Bournemouth. I took a trip to Bournemouth by train and it was already crowded with people bringing beach hat, umbrella, hats and lots of cute things prepared. Since I saw a good review on Trip Advisor about the beach in Hengitsbury Head rather than the one in Bournemouth, I took the liberty to do the solo trip there instead!

How to get there?

It was a hassle ride. Some say that Christchurch is the nearer station to the Hengitsbury Head. While on my journey, I had to ride the bus two times from the Bournemouth station by using the Yellow bus and Google Maps app. That took me around 1 hour and a half whilst waiting for the bus takes pretty long time too. Meanwhile, some people take another train back and stopped at the station before the Bournemouth station, called Brockenhurst and ride the bus for one time. Once you arrived at the last Hengitsbury Head station, need I remind you that you will walk and trek most of the days!

I walked a lot when I got there. The view was super beautiful with the large meadow and the beach on the side. From afar you can even see the road that leads to the hills. Without further ado, some pictures to tempt you: 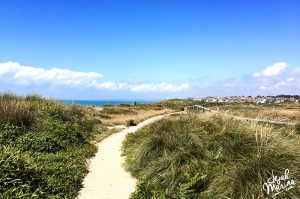 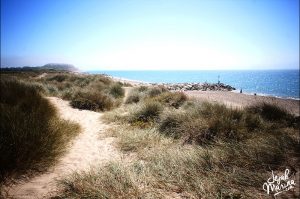 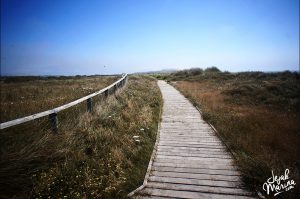 The road paved with the wood. So cute! 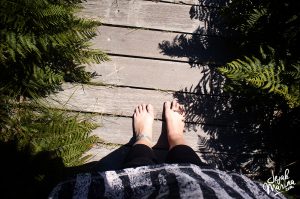 I even barefoot along the way! 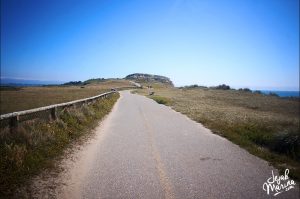 The big hill ahead 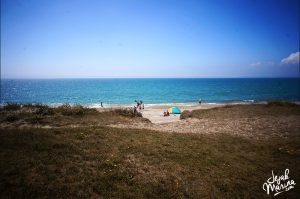 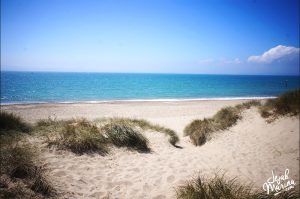 That is such a beauty!!!

Since it was hard for me to find a good decent beach (for almost 1 year!!!!), so every 10 minutes I walked and found a good spot, I had to stop and lay down. You can guess that it took me 2 hours to get to the hill! It was the best day of my times in the UK, mainly because of the feeling that I found the best beach in the UK. 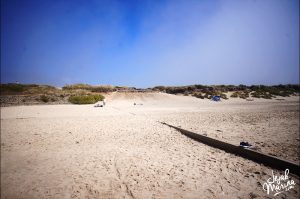 Smooth sand beach with no people! Come on!!!! 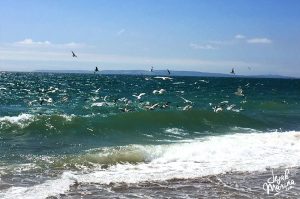 It was weird that I had to swim with the seagulls as well! 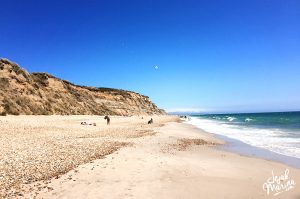 How can you resist this? 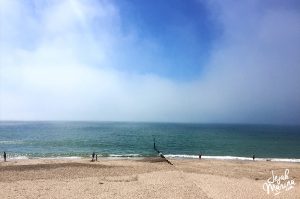 After I climbed the hill, you can imagine that it has the most beautiful view I have ever seen. I even forgot that I was in the UK. The sky brightly shone, the beach was blue crystal clear, and the meadow was properly taken care of. It was totally gorgeous!
Then I walked across the hills until I found a place called Mudford with plenty of beach huts. It was kinda new for me as we usually don’t have that kind of thing in Asia. But these small houses were cute with small kitchen and garage store to keep the summer equipment! Mudford were crowded with people and so I circled back the hills and went back to the first place where I started the trip. The journey to go back was kinda nice too, I walked inside the forest and then was greeted with the big beautiful lake. The journey was an eye candy along the way. 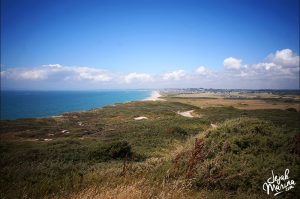 View from the hill 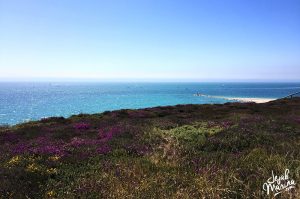 Gorgeous view while trekking the hill 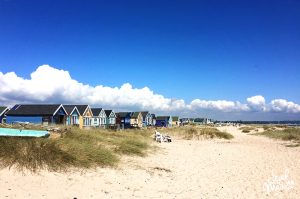 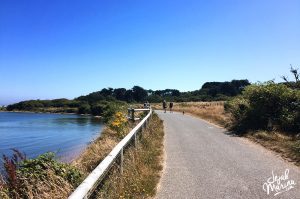 Road down the hill 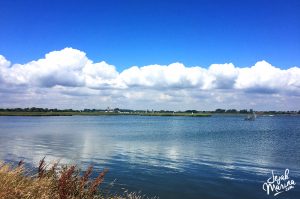 The big lake across the road to go back

Where else to go?

There are plenty of places to go after you visit Hengitsbury. You either can continue to Mudford, Christchurch or back to Bournemouth. Hengitsbury Head Visitor Center is a good place to visit as well. Sadly it was closed when I got there but plenty of good reviews said that it was a nice visit. As my train was going to go in the afternoon from Bournemouth, I decided to do some trekking aside the cliffs to go back to Bournemouth. It was 3 hours trek under the sun and I found good beaches (Again I had to lay down and swim!), even though it was crowded and full of families and young people. Later I found out that the beach name was Boscombe beach and it was only 1-hour walk from the Bournemouth pier. The road was pretty nice, the view was an absolute beauty as I was accompanied by an ice cream. Yum!

I even found some places offering diving and snorkeling services in here but I am sure it was rare to do in the UK. Nonetheless, you can even try if you want to do it, but it will be hard to compete with the one in Bali. 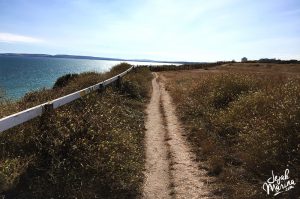 trekking on the cliff side 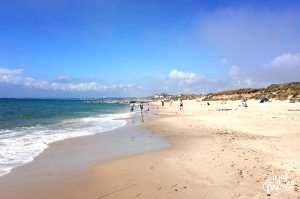 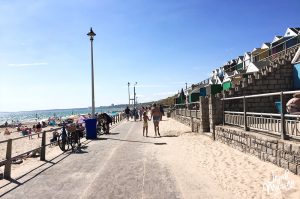 I did not see much of Bournemouth as it was super duper crowded. Honestly, I did not enjoy the time when I was there. I only had a chance to visit Bournemouth pier and turns out the beach was not as beautiful as the ones I have seen before and I could not find any good spots to lay down as it was the busy place! The Bournemouth pier was full of entertainment, big building and blocks of houses. This reminds me of Pangandaran beach in Indonesia where it was the most favourite place to go for the people in West Java area. Bournemouth reminds me of that in a modern way. 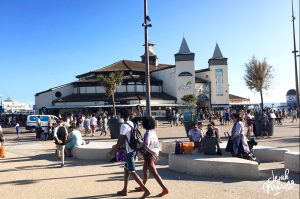 Bournemouth pier, the center of entertainment 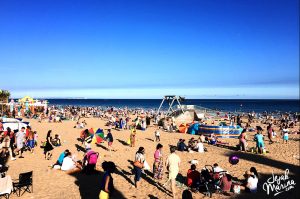 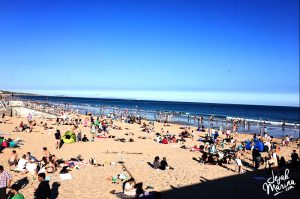 Where can I lay down? 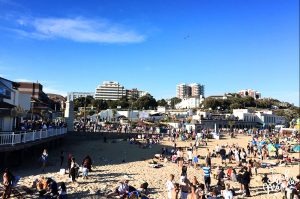 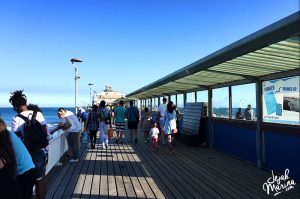 As you can see, if you ever planned to go to Bournemouth, I recommend going to Hengitsbury Head instead. It took almost 2 hours to get there but the feeling and the atmosphere was totally worthed! If you are as crazy as I did, you can try doing the trekking too. It was tiring but satisfying during the journey. I have to say that the beach was not as beautiful as the one in Nusa Lembongan Bali, but it was the best getaway in the UK. So, put this on you next summer list!

Have you been to the Hengitsbury Head? Any useful tips that you can add?

[…] where to go. I had plenty of unexpected experiences and new things that I didn’t know before. Hengitsbury Head in Bournemouth was an expected trip and I love every bit of it. I stumbled upon untouristy places many times and […]

Love the photos, Marina!! The beach reminds me of West Dorset, the shooting location of Broadchurch. The beaches on that side of the world are so different from what we have in Asia but I love them too! Especially those wooden cottages!

Yesss.. it is a lovely place! Never knee about that place. But thanks for letting me know

I love all of the photos! This place is totally new to me, but it looks like a must-visit destination. 🙂

It is! Must visit when you go to The UK

Such a useful gudie. Thanks for sharing!!