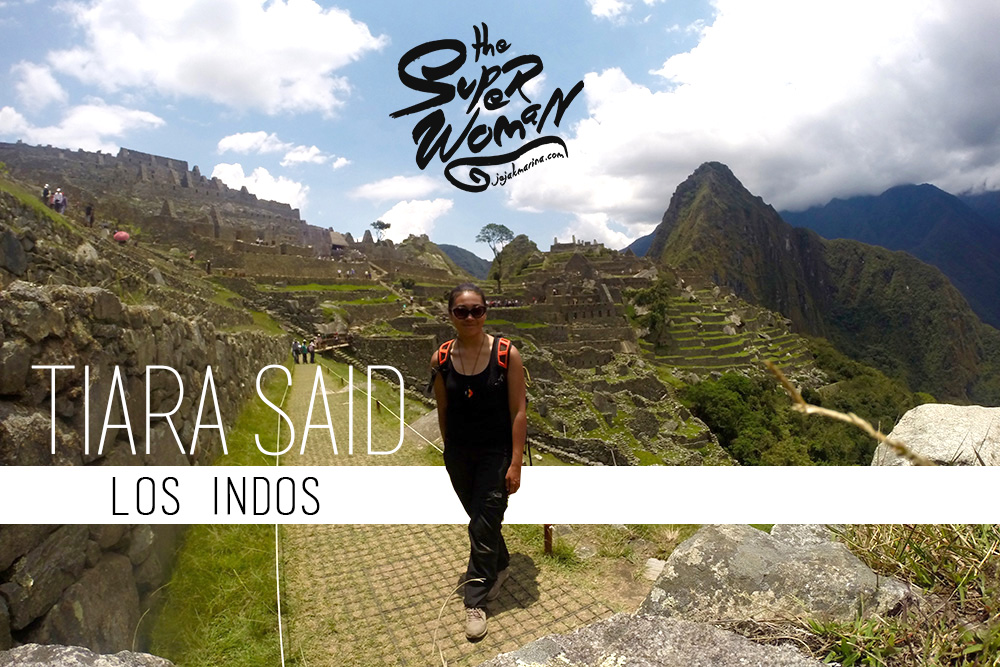 I was contacted by the other author of Los Indos, Rizki Tarisa to check out their website and if I could highlight the profile for the next Indonesian Solo Female Travel Tiara Said as the Superwoman of August. I was amazed with their adventures on their blog! Especially when I read how far Tiara has been on the road too. When I contacted her and saw her Facebook, turned out we have a mutual friend! My dive buddy in Bali was her classmate back in Medan. See how small the world is? 🙂

Oh, I do understand when she said that some people don’t even know where Indonesia is. This is a good chance for us to show the world that.. Hello! Even we Indonesian, got some cool female backpackers too!

She has plenty to say about solo traveling and  I totally agree with what she wrote on the Q&A below. Would love to meet her in person if I ever had a chance! Meanwhile read her stories to get inspired by her journey. 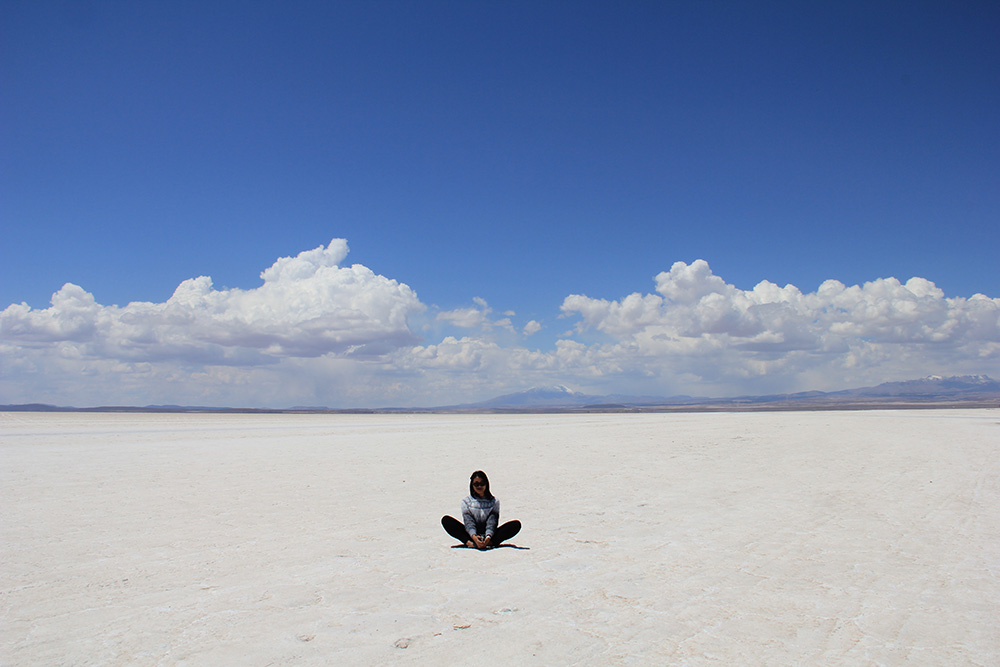 I think it was those short family trips I took as a child that initially sparked the travel bug. I used to love the rush and excitement of getting on planes and having my passport stamped.

Then during my uni days, I used to work part-time at a communications provider for backpackers, where I met a lot of young solo travelers from all over the world. I was so fascinated and inspired by their stories and the lifestyle of long-term travel. And on the night of my 20th birthday, I made a before-I-turn-30 bucket list, one of the goals being solo backpacking around the world. It took a few years for me to save some cash and leave (cutting back on expenses was not easy), and technically I still have a huge portion of the world to cover, but I’m grateful I did it.

My very first solo trip was three weeks in Cambodia and Vietnam in 2011. I was immediately mesmerized by the whole experience, the places, the freedom. But it wasn’t enough. So in mid 2013, I quit my job and embarked on my first long-term solo travel, starting in Amsterdam. I still remember the butterflies I got when I first landed at Schiphol Airport. A feeling I later found to be very addictive.

In the months of my exploration around Western Europe, I learned Spanish in Spain, took an impromptu road trip to Portugal with people I just met, learned heaps about Roman history in Italy, was amazed by Michelangelo’s work in Vatican, ate my way through a dozen patisseries in Paris, strolled through Diagon Alley in London, chased Auroras in Iceland… The list goes on, I can keep going.. 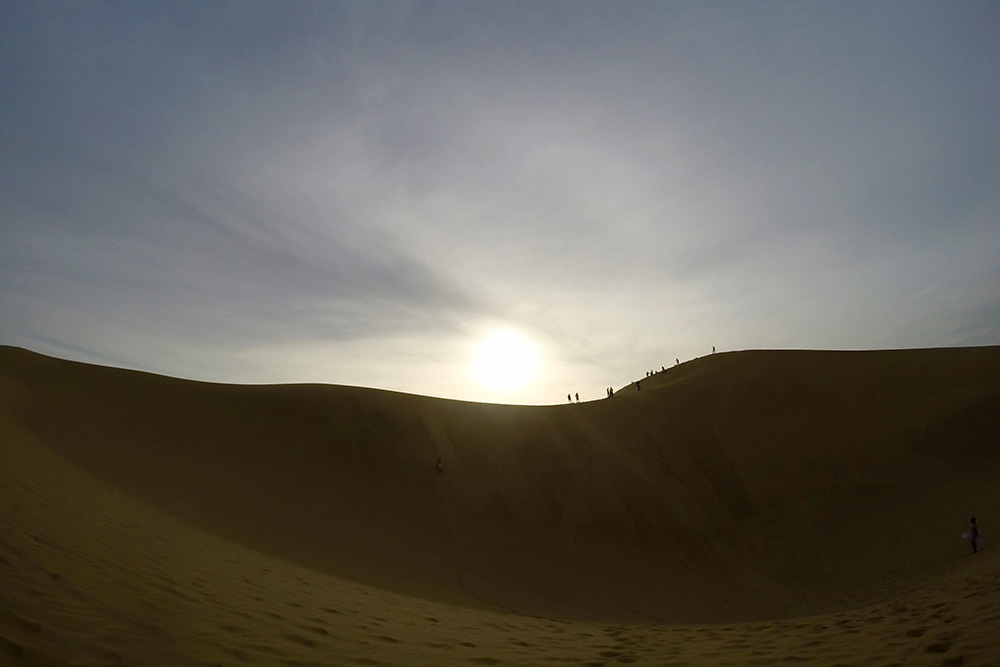 Well yes there were those few mildly troublesome moments. Like when I needed someone to watch my stuff while I go to the bathroom at the bus station, instead of carrying my backpack into the cubicle (it’s not easy being a girl). And when I wanted to try all the food they were selling, and wish there was someone I could share the calories with (but I still ate everything anyway).

But the pros outweigh the cons by a landslide. One of the best things about traveling solo is the freedom and flexibility, that you can go wherever, do whatever, whenever and however you want, without thinking about anyone else. It may sound a bit selfish I know, but trust me it’s extremely liberating. You plan your own itineraries, you’re not tied to any schedules, and it’s so easy to make decisions. Whether you want to wake up for the sunrise, or sleep in all day, it’s all up to you.

And above that is that when you travel solo, you’re never really alone. You tend to be more social and so you meet new people everywhere. I was lucky to meet and hang out with fun, interesting, like-minded people during my travel, and had an amazing time. Sometimes it was just a walk around town, or a visit to some site, but there were also a couple times where I traveled together in a group for a longer period, which was a really nice break from being alone. 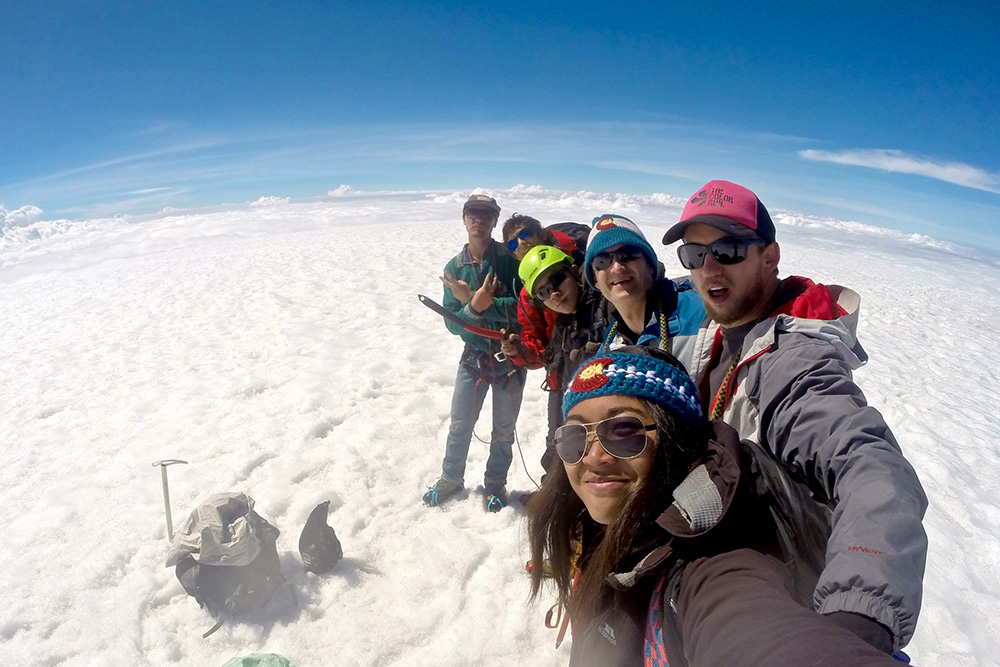 As cliche as it sounds, probably all the travelers I met, all the inspiring travel stories I heard. And I must say I met a lot of inspiring people during my travel, from the guy who hitchhiked and couchsurfed all over South America, the Brit who rode his bicycle all the way from Alaska to Chile, the middle-aged guy who has been traveling everywhere for over 20 years, the Japanese girl who traveled solo all around the world… there are too many. Every person, every story just gave me more energy to keep going and made me want to explore more.

What is your favorite websites and travel apps do you often use?

Travel guides are a good start to scratch the surface and get a general idea of things, but I never stick by it entirely. I rely on plain ol’ Google, as it often led me to a lot of interesting travel blogs which I found to be a lot more useful.

I personally fell in love with South American countries. Colombia, in particular, is one of the most misunderstood and underrated countries to visit. Its landscape, mountains, beaches, culture, villages, cities, and nightlife are all a traveler’s playground, but it’s the warmth and smiles of its people that really make this country what it is.

Contrary to popular belief, I found South America to be very safe and friendly for female solo travelers. Just you know, always use common sense and don’t do anything stupid, like carry $1000 in your wallet, or walk alone drunk at 3AM in a dark alley, which are things you probably shouldn’t do anywhere anyway.

A camera – I would cry if I lost all my travel pictures.

What’s also interesting is that I learned the ability to live with a lot less. I ended up leaving a trail of stuff I thought I needed, including a hair-straightener, beauty supplies, shoes, and those extra outfits I never wore.. It felt good to take the weight off. And after I lost my phone in Peru, I was living without a phone for 5 months.

Everyone has their quirky thing when they travel. I love doing temple hunting and visiting museums. So what’s yours? 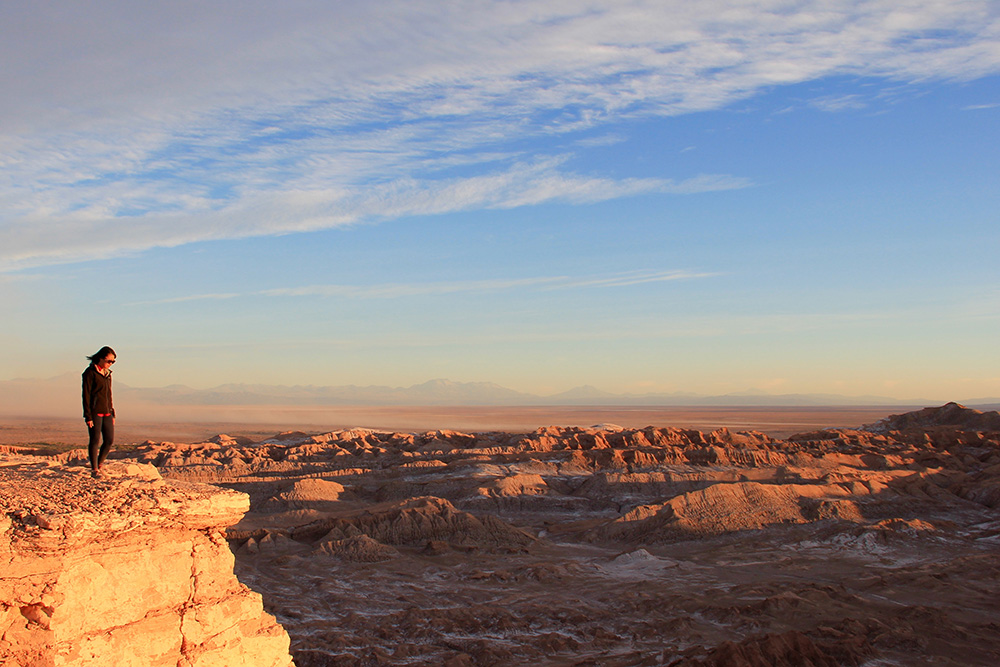 I have a collection of small memorabilia from each country. And I love checking out the local markets.

If you’re still unsure about whether or not you should travel solo, let go of whatever it is that is holding you back. It’s natural to be a bit anxious. If you think it’s scary, well that’s part of what makes it so much more fun.

Now, if you already have both feet over the line, then I’ll share a few things I picked up on the road:

Travel slow, do not rush it. It’s the only way to really soak in the full experience.

I stayed in hostels and took the cheapest form of transport (which is often the longest), not only to save money but also because I found that you will see and experience more this way.

Open yourself up to people. Meet other travelers, talk to the locals, and you will learn a lot. Trust your instincts, and you’ll be surprised at the kindness of strangers.

Don’t just stick to the main tourist sites. Take a trip off the beaten path.

Don’t be afraid to try new things. I only discovered my love for the mountains and hiking 9 months into my travel, and been hooked ever since.

Be spontaneous and keep your itinerary open. Don’t plan to the minute, book your bed one night at a time, and play everything by ear. There were times when I just showed up at the bus station and figured out my next destination then and there. I discovered that sometimes if you just roll with it, you end up having the best time of your life.

For the Indonesian readers out there, don’t be surprised if some people have never even heard of Indonesia. I found this especially true in South America. Be prepared for people to shout out “Ni hao” or “Konichiwa” at you. It makes for a good laugh though. For me the funniest was arguing with this man who was adamant that Indonesia is a part of China.

And finally, traveling is not the same thing as a vacation. It can be extremely exhausting – physically and emotionally. It might not be all rainbows and unicorns every single day. You may get a couple of bad travel days here and there. I’ve had a fair share of those, including getting lost (many times), enduring countless grueling long-haul bus rides (one of which had a horrible toilet stench for 7 hours), and one time I even broke down to tears because for 2 whole weeks absolutely nothing was going my way. But in the end, you know that a bad travel day is still better than a non-travel day. Because of what you achieve and discover from it. Plus, it makes a much better story. 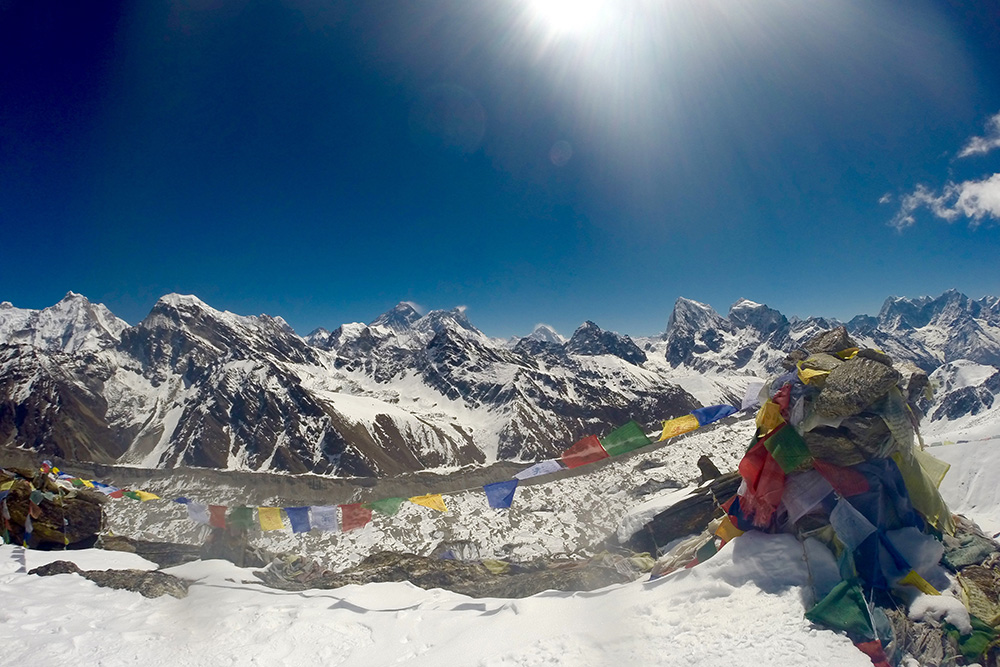 “We travel initially to lose ourselves, and we travel next to find ourselves. We travel to open our hearts and eyes. And we travel, in essence, to become young fools again—to slow time down and get taken in, and fall in love once more.” — Pico Iyer

She grew up in Medan, Indonesia, and lived her adult life in Sydney, Australia. In July 2013, she bought a one-way ticket to Amsterdam, left her 9-5 routine, and commenced the trip of her life. She traveled for a period of 16 months, exploring 18 countries in Western Europe, South America, and South Asia. She is now trying to relive her trip through her memories and photos, while mentally planning her next travel.

This is so awesome. Thank you so much for featuring me on your blog, Marina. Hope to meet you one day 🙂

It is such an honour to feature you too! Hope we can meet in person someday! Yesss! 😊

Reblogged this on Travelling_Make_Me_Alive and commented:
“We travel initially to lose ourselves, and we travel next to find ourselves. We travel to open our hearts and eyes. And we travel, in essence, to become young fools again—to slow time down and get taken in, and fall in love once more.” — Pico Iyer

Now i need to make my own travel plan too 🙂 🙂

Pastinya! 🙂 we use english words so other travelers could see that Indonesia also have cool female backpackers!