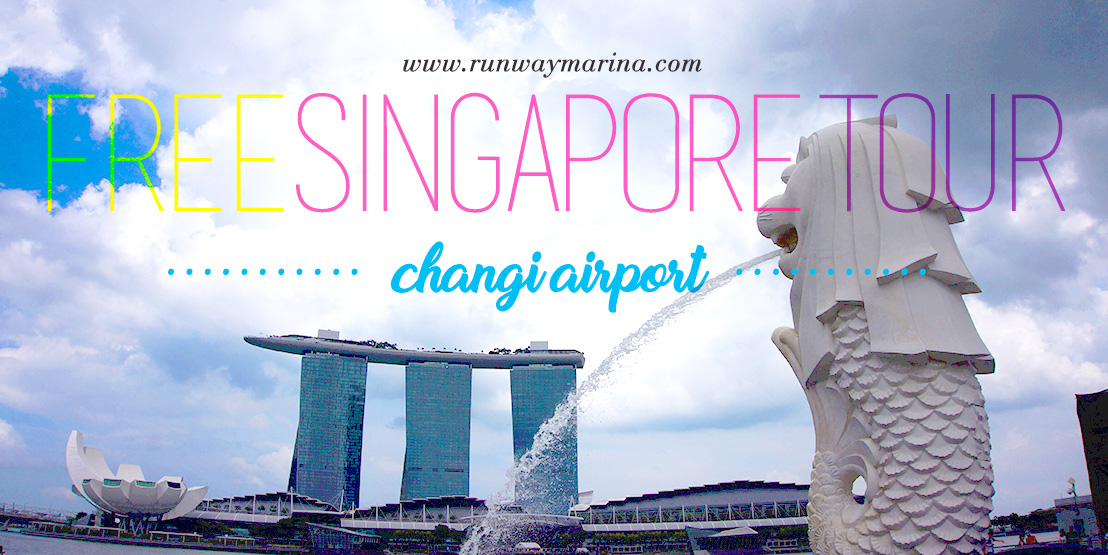 Layover in Singapore Airport is going to be a blast for you guys! They have so many free things to do in Changi Airport and the ultimate one that you have to try is the Free Singapore Tour. I have been reading about this free tour that I want to experience it myself! When I had 5 hours transit time for my flight to the UK, I could not sign up because of the regulation. And so after we landed in Changi Airport, we immediately tried to find the Free Singapore Tour booth by asking (God knows how many) Changi staffs along the way. I was super happy when the booth lady checked out our flight and said that we can sign up! Yay! And so, I will be writing a guide on how you can also enter it too!

First thing first, you got to be thankful for the company who organised this free tour, which is the Singapore Airlines, Singapore Tourism Board and Changi Airport. This tour is sort of like the Singapore introduction to seduce more tourist come to Singapore and a good way to spend those long waiting hours in the airport.

What do you need?

Where can you find the booth?

How is the process?

After we got the registration, we had 30 minutes waiting until the tour starts and so we got our lunch first to fill up the energy. When the tour starts, a Singaporean lady gave us a bunch of stickers to put in our t-shirt with numbers, which makes it easier for them to check on it. The tour guide lady surely gave us a brief in a very detailed and organised way, which I think is the quality of working with the Singaporean; Everything has to be in place (so they say). 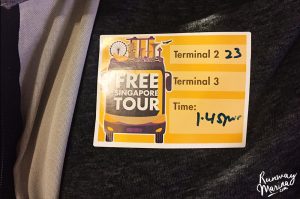 The immigration line was very long in Terminal 2, and so I was super scared that we couldn’t make it to our next flight. But hey, turned out the tour guide already arrange a special immigration posts for us on the other side! And the queuing was short and fast. We also noticed that the stamp on our immigration card was marked by using the Free Singapore Tour. 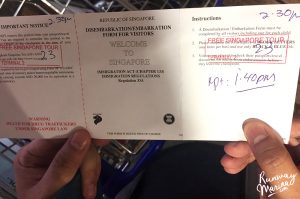 Immigration stated that we are out for this free tour only! 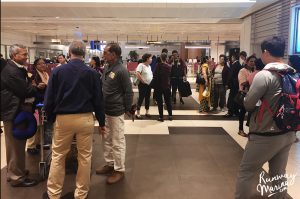 bunch of folks are going with us!

After all of that documentation stuff, we did not even get our luggage check at all on our way out (That is fast!). And finally, we went to the tour bus. (I gotta be honest, it’s been a while since I use any kind of ‘tour’ stuff. Solo travel makes you an addict.) 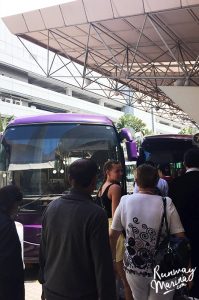 What can you see?

As I and Ali only had a chance to take the Heritage tour on daylight, we only saw a couple of things here in a flash. Since the tour only lasts for 2.5 hours, they only took us to see the Merlion park and Kampong Glam. Apparently, they also try to change the tour routes couple of times so that people won’t be bored with the same circle. So the tour I had will probably not gonna be the same with what you will have.

You gotta be amazed that much European was excited to see this tour. For Asian people (Indonesian specifically), Singapore is already the vacation-place-to-go whenever we have 3-5 days off. I personally have been here years and years ao but never really liked it. But the way the tour guide lady explained about their history, made me intrigued. She explained why they have “Singapore” name, their diverse culture, and the people who live in Singapore. I gotta say, it was an eye opener for a person who hated modern city like me. 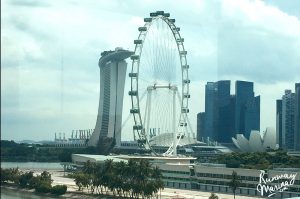 view from the bus (pardon the glass effects!) 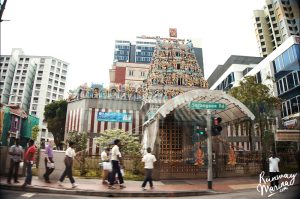 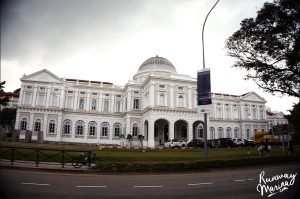 First stop was the Merlion Park and the bus stopped at the Jubilee Bridge. We gotta walked for 5-10 minutes to reach the Merlion park. And yes, of course, it was a touristy place among all. The sad part that we only have 30 minutes here. We already spent at least 20 minutes for walking, and that left us 10 minutes only to take the pictures. Ah well.. not much to see anyway right? 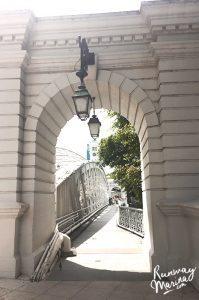 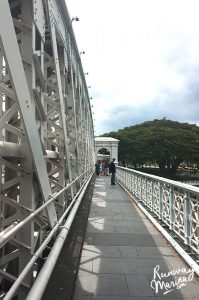 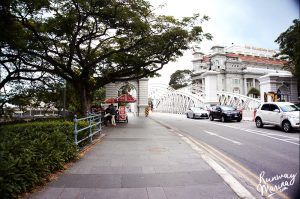 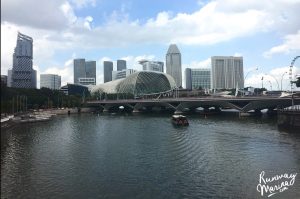 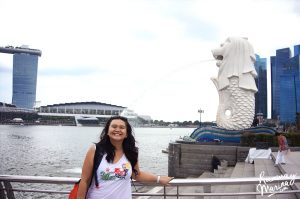 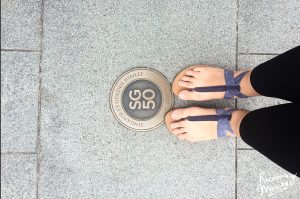 Along the way, the lady kept talking about the street that we passed on, the Little India, Chinese area and our second stop, Kampong Glam or known as the Melayu Village. Again, she let us know that we were gonna walk for 20 minutes non-stop and if anyone would like to stay on the bus, she told us that we only have 30 minutes top is the free time to look around. Of course, I ad Ali followed the lady along the way and she showed us couple of cute cafes and food shops on th street. Then she let us know about how the “Glam” name appears as it was a fruit name for “Gelam”. She even showed us the tree! 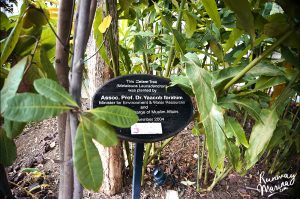 We got passed by the Melayu Heritage Centre and the Sultan Mosque and we walked through a couple of shops and food stalls (oh that smell). We walked along plenty of cool graffiti along the way and we enjoyed the scenery. Although it was a bit in a hurry cos we gotta make it back to Changi immediately. We had to finish the tour due to the heavy non-stop rain. 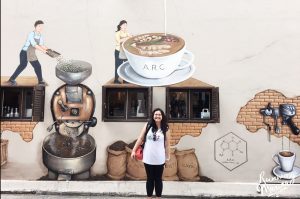 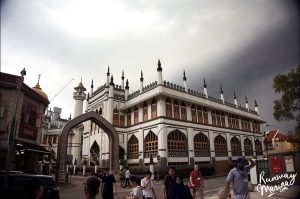 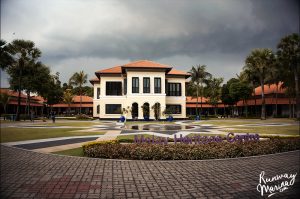 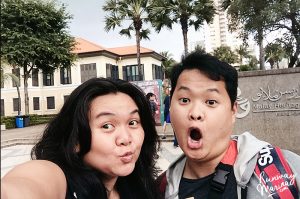 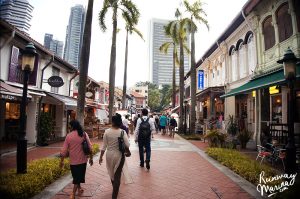 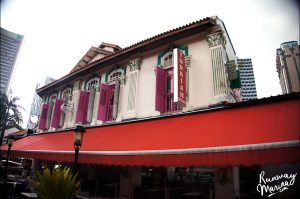 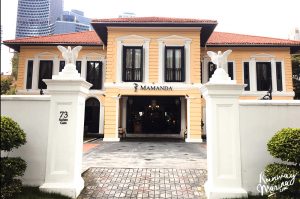 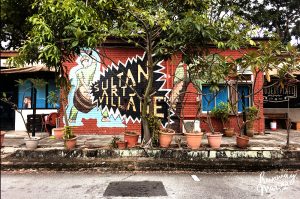 Then we also have a bit drama of the old Indian husband who got lost nowhere and the wife was even crying and begged us to stay waiting for him. What made me impressed is the tour guide was super helpful and went outside try to search for him. Talk about job dedication, people! We were all a bit worry as we might miss our flight, but then again, the lady already reminds us twice about what time we should get back to the bus. Seriously, I did not understand why people would never take time in concern. And after half an hour waiting, the husband showed up and said he was looking at some shop! Geez! The lady kept her patience and reminded us again to stick to the schedule they have provided.

So we did learn something on this trip (aside from being on-time), this Free Singapore tour surely a good way to promote Singapore tourism and yes.. it got me! The trip was not so bad but we had to rush on every stop we made. For people who never knew about what Singapore is, this tour can be a good beginning to know their general stuff. The tour guide was super exquisite, friendly and helpful even though we had problems along the way. We got plenty of cool pictures just by laying over Changi Airport. Yay! Oh, we even got our free Trip Advisor goodie bag at the end of the trip! 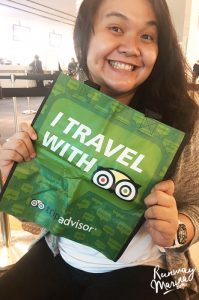 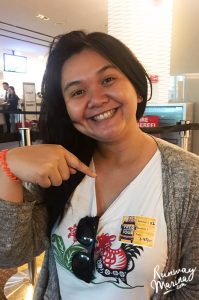 Superwoman of May 2017: Lani Eleonora

The Confession of Being an Indonesian Solo...

last time went to singapore on 2012. A lot of changes on this country. Need to revisit it again in the near future.

Yepp! It was a great stopover. You are lucky if you were transit in Changi! 🙂

I completely agree with this – Changi is a city in itself and it’s so easy to spend even a day exploring it all! I remember when I was i Singapore, we actually came to the airport for the meal – it was so good there 🙂 All your tips are great for the registration…

It is! Thanks! Hope it helps!

You guys visited so much of Singapore just in transit. Such great organised work from Singapore Air, Changi Airport and the Singapore Tourism Board for making this all possible.

Sounds like a nice free tour. I would not enjoy it if time was an issue though since I hate worry about time and missing my flight. It would be more relaxing for me to stay at the airport. Glad you made the most of your layover though.

Yeah though it was like that. But turned out everything went well. Thanks for reading!

Very useful information. With more and more long haul flights coming into picture, layover times are increasing. We always want to make the most of this time. And if the lay over is in Singapore, we will definitely want to get out and experience the wonderful place

Nice write-up. I have never taken this tour . Once we had a layover of over 10 hours (purposely done) and we could get a 24 hour visa to go to the city. We did a lot of touring on our own. Don’t know if that class of visa is still available. I have enjoyed everyone of my trip to Singapore . I seem to discover something new every time.

No images found!
Try some other hashtag or username